The fast-talking Oracle CEO declared Wednesday that IBM and SAP are no longer his main rivals and pointed instead to a bevy of fast-moving cloud service providers. 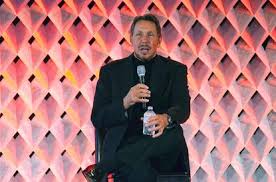 “Our competitors are this whole new generation of cloud companies. We’re focused on the infrastructure companies like Amazon and the SaaS companies like Salesforce,” Ellison said.

“We just swapped a bunch of big guys — IBM and SAP — for a bunch of other guys; small but agile,” he said. He also named Workday as a rival, the application service provider started by PeopleSoft cofounder Dave Duffield, but then quickly dismissed its product.

Ellison was answering questions after a talk at Oracle’s CloudWorld conference in San Francisco, where he gave a sales pitch for Oracle’s cloud and on-premise software.

The CEO took plenty of jabs at SAP’s businesses, though, suggesting the German software giant is still on his mind.

He was also asked if Oracle was late or early in responding to the cloud. It’s a favorite topic for Ellison, who has said in the past that the whole notion of the cloud is “gibberish,” but also claims to have started the first cloud company with Netsuite.

On Wednesday, he explained why it took Oracle several years to make its applications available as cloud services.

As well as rewriting its apps, it had to rewrite its Java middleware and make its database multi-tenant for applications hosting.

“You can say that we’re late but it’s not because we started late, we started 10 years ago,” Ellison said. “It was just an enormous task bringing an enormous suite of apps to the cloud.”

The work, embodied in Oracle’s Fusion software, is compete, he said, but added that “you’re never really finished.”

He took questions on a range of topics. One audience member asked him what he would say to a customer worried that the U.S. National Security Agency might be “data surfing” in Oracle’s cloud.

“To the best of our knowledge, an Oracle database hasn’t been broken into for a couple of decades, by anybody. That’s how I’d answer it,” Ellison said.

Oracle’s first customer was the CIA, he said. “But Mr. Snowden never could have gotten into an Oracle database,” he claimed, referring to the former NSA contractor.