Singapore’s restaurant booking site, Chope, has inked new partnership deals in China and with travel reservation portal TripAdvisor as it looks to reach more diners and F&B outlets across the region. 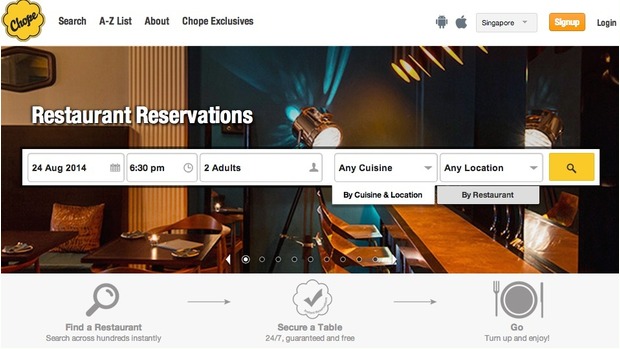 The entertainment and dining guide is touted to be popular among expats and English-speaking residents in China, clocking 5.8 million pageviews a month and boasting a print circulation of 120,000.

With the new partnership, diners can book tables via the websites and mobile apps of both City Weekend and Chope, said Arrif Ziaudeen, CEO of the three-year-old startup who founded the company soon after graduating from Stanford’s Graduate School of Business with two other partners.

The agreement currently covers F&B outlets in Shanghai and Beijing, but will eventually expand to other Chinese cities, he said. City Weekend also serves readers in Guangzhou and Suzhou.

In an interview with ZDNet, Ziaudeen further revealed a new as-yet-announced partnership with TripAdvisor, integrating Chope’s booking service with the travel website. The revelation came in response to a question about whether he had plans to expand the startup’s presence into other related markets, following OpenTable.com’s new partnership with on-demand car rental service, Uber.

“People go to TripAdvisor obviously in search of hotels and the next logical step from there is to look for places to dine. They look at reviews of the restaurants [on TripAdvisor] and can directly proceed to make a dining reservation via our booking system,” he explained, adding that clicking on “Find a table” option on TripAdvisor will pull up Chope’s reservation tool. “Just as with taxi booking [in the Uber-OpenTable partnership], we feel that there’s a nice synergy between hotel and restaurant booking.”

The integration between Chope and TripAdvisor has been lived for just two weeks, but he said the early numbers of reservations “are promising”. He said the new partnership has a revenue-sharing component, in which Chope is powering TripAdvisor’s reservation system and sending diners invitation to submit their reviews on the travel site.

Asked if he had plans to expand into other Southeast Asian markets, Ziaudeen said the company’s focus for the near-future is China. He noted that he had looked at the region and found it too fragmented, making it challenging to to address as different marketing teams would have to be set up in each country.

In comparison, China’s various cities were “homogeneous enough” for one major service to support the entire country, he said. In addition, its sheer market size offered more growth potential even within the cities, where Shanghai’s estimated population of almost 24 million dwarfed several cities in Malaysia, for instance.

The scale is significantly different, he noted, adding that this meant that the number of potential F&B reservations in markets like Malaysia would be exponentially less than China.

In addition, the Chinese reservation market is still young and largely untapped, giving Chope plenty to “chew on”, he said. “We’re lucky to find a partner in Ringier and leaning quite heavily in the partnership. They have 16 years of experience in the market and very F&B focused with great relationships with the restaurants there.”

According to Ziaudeen, the Ringier partnership will also have some revenue-sharing component, and Chope will plow back its earnings by buying up advertising space on the lifestyle website. Restaurants listed on the site can now also tap the Singapore startup’s reservation system as well as table management software.

Chope collects a booking fee from restaurants for each dining reservation. It also provides a table reservation system designed to help F&B outlets optimize their seating and turnover. Delivered over Amazon Web Service and Microsoft Azure, the software-as-a-service offering is available to restaurants on a monthly subscription fee.

This and booking fees collected from dining reservation contribute equally to the company’s overall revenues, but Ziaudeen declined to provide exact numbers. He did reveal that Chope was recently profitable in Singapore, while its business in Hong Kong–launched in April 2013–is still in the red, though, the company is “happy” with its growth there revenue-wise.