A strong case can be made that Oracle  has the widest, deepest, and most-modern set of cloud-computing solutions in the world. More than 10,000 paying customers are using the Oracle Cloud, and that extends out to 25,000,000 million individual users. Can any other IT vendor that claims to be a serious cloud-computing player—IBM, SAP, Salesforce.com, Amazon.com, etc.—match Oracle’s offering across not only cloud applications but also cloud infrastructure and cloud platforms? 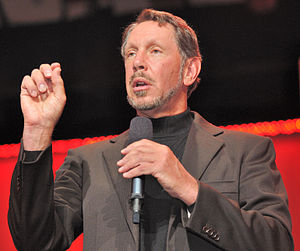 Any other IT companies out there able to give customers such full and open choice?

On top of that massive R&D commitment over the past several years, Oracle has also invested significantly in its cloud solutions and strategy during that time by acquiring a number of SaaS companies now being integrated with Oracle Cloud.

In that context of Oracle’s unquestioned leadership in the cloud-computing field, I’m starting to feel sorry for some of the deeply committed Oracle-haters in the media and punditry class who, in the face of overwhelming evidence to the contrary, continue to try to belittle or marginalize Oracle’s cloud strategy and solutions, and continue to ignore the the rapidly growing number of customers choosing to run significant chunks of their business on Oracle’s cloud products.

I feel bad for them because they’re completely missing one heck of a revolution in the world of cloud computing, engineered systems, customer choice, simplified IT, and the profound impact all of those are having on business customers across the globe.

And they’re missing that revolution because they’re unwilling to step back and see the world for what it is becoming, and because they are choosing for whatever reason to cling to outdated and deeply flawed perceptions of Oracle, its business model, and its capabilities.

As a result, some commentators continue to try to push the theme—in the face of overwhelming evidence to the contrary—that Oracle was late to the cloud, or is hedging its bets in the cloud, or is trying to fool customers with faux cloud, or that Larry Ellison somehow doesn’t understand the cloud or the enormous ramifications it’ll have on the tech business. (For a deeper look inside those fantasies, please check out Larry Ellison Doesn’t Get the Cloud: The Dumbest Idea of 2013.)

In our turbulent and relentlessly changing world, that’s the wrong way to go for individuals ostensibly responsible for chronicling those changes and giving readers a look over the horizon.

Back in 1946, the head of the 20th Century Fox movie studio, Darryl F. Zanuck, offered this perspective on a new technology that some thought might turn his industry upside-down: “Television won’t be able to hold on to any market it captures after the first six months. People will soon get tired of staring at a plywood box every night.”

As a movie mogul whose business was predicated on getting people out of their homes and into theaters, Zanuck clearly had a vested interest in maintaining the status quo and downplaying the significance of any innovation that didn’t advance the goals of his movie studio. But regardless of his rationale, Zanuck was profoundly mistaken on the significance and impact of television.

And I can’t help but think that some of today’s commentators on the IT business have fallen victim to a comparable sort of reality-distortion field that seems to frame their view of what Oracle’s doing in the dynamic and high-value world of cloud computing.

Now, I’m fully aware that some people just don’t like Oracle—and that’s fine. After all, some people don’t like kittens, or orange juice, or baseball—and that’s why, as a dear friend liked to say, God made chocolate and vanilla.

But when the Oracle Cloud serves 10,000 paying customers and is used by more than 25,000,000 people, I have to wonder about the thinking behind a recent headline on a well-respected media site that says, “Sorry, Larry, But Oracle’s Cloud BS Is Wearing Thin.” Here’s why: