A new report shows that computers based in India now send out more spam than ever before, with some having “been turned into spam-spitting zombies in botnets.”

India has surpassed the U.S. and taken the lead as the greatest spam-sending country in the world. One out of every six junk messages that litter users’ e-mail inboxes are coming from India, according to a new report from SophosLabs.

The security vendor’s third-quarter “Dirty Dozen” report of spam-relaying countries found that India upped its percentage of global spam for the third quarter in a row and now accounts for more than 16 percent of all junk e-mails. 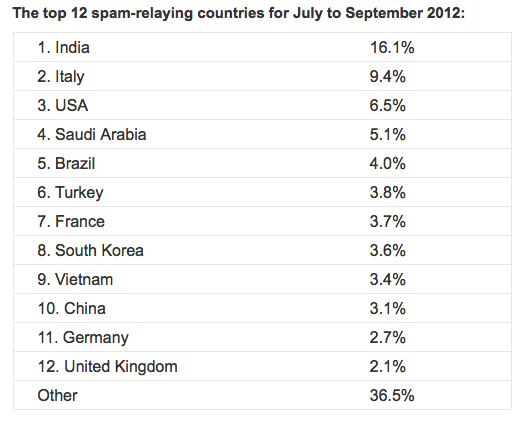 What is important to note, however, is that this spam doesn’t necessarily come directly from India’s computers — but rather from the country’s “ill-protected machines” that “have been turned into spam-spitting zombies in botnets.” So those people who are creating the spam could be originating from anywhere.

The latest Dirty Dozen report suggests that a not insignificant number of PCs in India are harbouring malware infections that turn PCs into spam-spitting zombie slaves, controlled by the cybercriminals who make money by punting junk emails to promote questionable goods, or simply use malicious spam to infect more computers. The authorities in India need to make IT security education a priority. One would be safe to assume that, if computer users in the country are being targeted in order to relay spam, they are likely victims of other online threats such as fraud.

According to Sophos, 5.3 percent of the world’s Internet users are from India — ranking it as the third most connected country after China and the U.S. — but only 10.2 percent of the population has Internet accessibility. Sophos notes that this may be one of the reasons why there is a lack of security measures for the country’s computers.The U.S. had been the number 1 spamming country for years, but was bumped by India in April. However, India has long maintained a top three spot. Other countries known for being top spam-senders are Italy, Saudi Arabia, and Brazil.

Security reports over the last year have shown that malware is on the rise. According to a report by McAfee last month, malware is multiplying at a faster pace now than any other time in the last four years. Worms, viruses, botnets, Trojans, and spam are increasingly attacking computers, laptops, and mobile devices.