Coffee tech attempts to save society by embarrassing introverts

Coffee occupies an odd space in Western society, in that it is both a socially acceptable mood altering drug and a de-facto source of social bonding; we used to chat around the water cooler, but the internet has largely moved in to replace such incidental small-talk. Coffee was the last bastion of shared experience in a decreasingly interpersonal society, especially in transient meetings between strangers. Even so, the seemingly endless success of chain coffee shops has shifted even this meagre social obligation from the average citizen to the already-overworked barista. 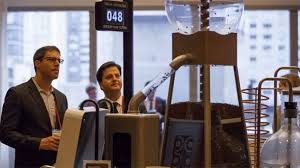 In a truly bizarre turn, the Economic Development Board (EDB) in Singapore has a new idea to combat the ever-widening distance that exists in our transient daily interactions: two cups of coffee at the same time. Despite the rather hilarious and self-congratulatory tone of the video, it’s actually a somewhat interesting idea. Aimed at business conferences and similar gatherings, the Coffee Connector would require some basic personal interaction with another customer before either of you gets your coffee.

The machine detects when two people are waiting for coffee, so this will only really work in situations with lots of possible coffee-consumers walking by. Nobody wants to grab a stranger and force them into thirty seconds of talk about the weather just so the machine will pour some java. I can imagine that there will be a fair number of full cups abandoned on top of the machine.

The machine does more than just shanghai people into standing near one another. Once they log in (ugh), each person’s first name and some general interests are displayed. This should ostensibly give you something to talk about, but whatever conference or event  brought you together will likely still be your main in-road to conversation.

All cynicism aside, there are worse ideas than inserting a little mandatory conversation into life. The coffee machine is a logical place to make such a stand, since it already occupies a uniquely interpersonal place in our lives. Coffee is something nearly all of us enjoy, to one extent or another, and it’s still seen as a somewhat social experience.

This sort of technology, which combines social activism with elegant industrial design and high-end coffee snobbery, would also be well suited to certain music festivals and other experience-centric events. For now, though, it is confined to building networks at business and technology meetings.