Bing vs. Google: Which Search Engine is Best?

You might have seen the commercials online or on TV: Bing has been waging a marketing war on Google, claiming that blind users prefer Bing’s results over Google’s by a 2-to-1 margin.

But has Microsoft’s search engine really advanced enough to pose a credible threat to Google? While you can test the comparison on your own at BingitOn.com, I’ve identified strengths and weaknesses for both. Either engine may have an edge depending on your personal preferences. 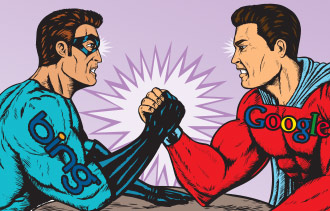 From social integration to speed to quality, here’s a look at how they stack up:

In this case, I tested the phrase, “income tax rates.” While the Google search engine results page (SERP) displayed information on both 2012 and 2013 tax rates in the first five listings, the only dated information found in Bing’s results was a single listing mentioning 2011 tax rates.

Bing advantage: Social integrations are stronger.
Bing’s results win in terms of the smoothness of its social integrations. The company’s contracts with both Facebook and Twitter give it access to more social data than Google, which must rely on the lesser-used Google+ network. The way it integrates social recommendations into its SERPs is also much less cluttered than Google’s results.

To measure this, I began entering the sample query, “latest Packers score” into both engines. Google provided this as a possible query result after only “latest Pack,” while Bing required the full “latest Packers s” to turn up the same result.

Bing advantage: Results pages are more attractive.
Bing’s search results pages have a certain visual appeal. And it appears that there are plenty of people who agree.

In many ways, Bing’s results look like Google’s used to, before Google cluttered its listings with “+1” buttons, social annotations and other useless features.

Google advantage: Connected products provide more background information.
If you use any of Google’s other products — such as Google Reader or Google+ — the search giant already has a wealth of information available to understand you and tailor its results to the listings that are most likely to be of value to you. While Bing offers similar products — such as Bing Reader — they aren’t nearly as widely adopted as Google’s offerings, meaning that Bing’s internal integrations aren’t likely to influence the company’s SERP results for many users.

In this case, because I’m subscribed to SEO and social monitoring service SEOMoz in my Google Reader account, I was more likely to see posts from SEOMoz contributing authors appear in my Google query results than in Bing’s listings. To me, this adds value by increasing the likelihood that results will appear from authors I know and trust.

Bottom line: Everyone’s search engine use comes down to personal preference. For me, I’m sticking with Google until Bing is able to claim a much greater advantage over the web’s largest, most preferred search engine