As providers move to the cloud, advisers awaken to its potential

Advisers have been paying attention to the idea of cloud computing for five years now. But only recently has the potential for this shift really hit home. 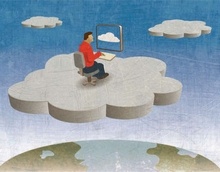 He recently began participating in a pilot test of a completely outsourced automated re-balancing system from Total Rebalance Expert. That service, a cloud offering, allows advisers to adopt a completely outsourced version of TRX’s automated re-balancing application, which previously had been monitored from an adviser’s computer. Advisers still use the application itself, but more for review and to re-balance their way manually through any sticky, problematic or oddball re-balancing chore.

“I love outsourcing and the cloud,” Mr. Berman said.

TRX is just the latest of the advisory sector technology vendors to offer an entirely offloaded cloud application.

In recent weeks, CRM Software Inc., after two years of development, began showing a cloud version of the company’s venerable Junxure product. The new version of the CRM product was built from the ground up with cloud-based delivery in mind, rather than just hosting of the traditional on-premises version of Junxure online, being delivered as software-as-a-service.

Schwab Performance Technologies officially announced availability of PortfolioCenter Hosted in May. That means the full iteration of the widely used portfolio management application can be migrated from an adviser’s own, often on-premises server to those of Schwab up in the cloud — in other words, its data center.

This gets the adviser out of the IT management business, at least as far as having to maintain, upgrade, patch and otherwise manage the software behind the portfolio management program. Advisers using the hosted cloud-based version can focus on managing their clients’ portfolios in the application and not the application itself.

“This is all kind of a natural progression for financial services,” said David Linthicum, an expert, author and advocate of cloud technology who works for Cloud Technology Partners, a think tank and consultancy.

He explained that while software-as-a-service is a good, concrete, easily visualized part of cloud computing, it is far from the full story.

“We are getting to what I call the nonvisual services — in essence, reaching out and communicating through the [application programming interfaces],” he said. “That really is the next step on the progression: information as a service.”

And therein lies the real future and power of cloud computing.

Peter Coffee is head of platform research at Salesforce.com. He also spent 18 years as the technology editor of eWeek, where he observed and interpreted the birth of cloud-based technologies to an enterprise technology audience. He explained that all the conveniences, efficiencies and cost-cutting opportunities presented by cloud computing are nice, but that it is nothing compared with what the future holds.

“What we are talking about is meta-analysis of vast amounts of aggregated, unrelated data, including market data, social media, news and, in this case, client and portfolio data, all brought together cheaply and easily to do predictive analysis,” Mr. Coffee said.

“And that is predictive analysis based on pre-failure signatures built into the algorithms, being able to discern what would delight people before they see it — even though they were never able to articulate that desire,” Mr. Coffee said.

He’s talking about taking such data and applying statistically meaningful signatures and behaviors, and being able to read the patterns they show — all of it done on commoditized hardware and software, much of it probably open-source.

“With this technology, I can have a new company coming out of nowhere producing at scale — with everyone wondering where they came from,” Mr. Coffee said. “The nimbleness of marketplaces and the degree with which you can be blindsided will be astounding.”

Lest advisers think this is all pie- in-the-sky, here is one tangible example of this powerful, and yet largely untapped, potential.

I recently met with representatives of boutique software developer and consultancy firm DataArt, who showed off some of these high-powered abilities from a laptop. Typing in most any nugget of information — one example was the ticker symbol for IBM — the application instantly tapped into remote databases containing much of the data described by Mr. Coffee.

On display were a half-dozen highly interactive, three-dimensional charts one could hover over, seeing correlations to a news story or a stock price dip or rise, along with some social-media streams and several other informational items.

The firm is so ensconced and consumed with real-world development in the cloud and through leveraging its tool set that it is very matter-of-fact about it.

“We simply call it the News Mining Dashboard,” said Alexei Miller, a partner at DataArt. “It is not a product we sell; rather, we just use it for demonstration purposes to give potential clients a taste of what is possible.”

“I have been peeling the onion for years now,” said fee-only wealth management adviser Steven Berman, owner of the solo practice Berman Advisors.

He has sought out, by design, as many outsourcing options as he can when it comes to technology.