How to weigh a cloud

Friction-free, weightless, immaterial: the information economy is losing all sense of gravity. The phrase “cloud computing” is completely at home in this floating world. 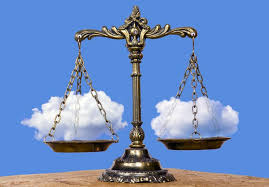 Like little brooks tinkling down the Big Rock Candy Mountain, film streams from the ether onto our screens. Away with clunky VHS tapes, DVDs and Blu-ray discs. Today we can view content (whatever happened to “watching films”?) on any device, from home cinemas to mobile handsets, that’s connected to the cloud. We are showered with plenty from an invisible otherworld of audiovisual refreshment.

Apple’s iTunes started selling video content in 2005, adding iCloud online storage and streaming in 2011. In 2008, five of the six Hollywood film and television majors launched their own Ultraviolet service. This allows consumers to create a “locker” where they store licenses to stream and download content.

Both schemes have big advantages. Studios have much more control over who uses their content and how; they can collect a lot of useful data about clients’ tastes; and the cost of transporting copies is borne by the purchaser.

In return, we get to watch wherever we go. So where is the downside? I’ll leave the lawyers to discuss what has happened in the field of intellectual property. Let’s just think about the cloud itself: what is it and where is it?

The cloud is a nickname for server farms. A server farm is basically a big shed containing thousands of screenless computers storing and delivering data to end-users. Plug it into the mains and watch it run.

The problem is that this many computers use energy to run, and to keep them cool. According to the US Department of Energy, in 2011, “information technology and telecommunications facilities account[ed] for approximately 120 billion kilowatt hours of electricity annually”, double the estimate the same agency made in 2008, adding that, “rapid growth in the US data centre industry is projected to require two new large power plants per year just to keep pace”.

The cloud is not weightless: it is a heavy industry. Add in the metals and plastics, the hydro dams, the thousands of miles of cables, the satellites and their rocket launches, and the millions of tons of electronic gadgets we use to access our movies – and the cloud looks a little less fluffy.

The consortium that runs Ultraviolet is called the Digital Entertainment Content Ecosystem. Maybe they – and we – should start taking that last word more seriously.