What Is The Cloud? (And Why Small Businesses Need To Care)

Cloud computing has come a long way to become a mainstream technology tool for business. Earlier this year, Parallels, a software company that enables companies like GoDaddy.com and Sprint to offer cloud services to small and medium businesses (SMB), reported that the cloud services industry grew to $45 billion worldwide last year. Helping to drive that were 6 million SMBs purchasing their first cloud service last year. 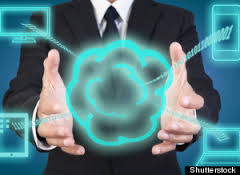 And, the report projects that the market is expected to grow annually at a rate of 28 percent through 2015 to be a $95 billion industry.

The cloud does for IT what companies like UPS and Federal Express did for the shipping industry, Stephen Braat, senior director and general manager of cloud and managed solutions for CDW, said.

“When it comes to getting product to customers, their technology enables them to do it on a larger scale at a lower cost,” he said. “The cloud is the great technology equalizer.”

Technology is a huge driver of competitive advantage, and historically, technology that larger companies used was not available to smaller companies, who typically have 50 employees or less.

“The technology that Wal-Mart was using for its supply chain was one that smaller businesses couldn’t keep up with,” Dan Levin, chief operating officer of Box, said. “Now, for the first time, there is technology available that doesn’t require hardware or technical expertise and gives small companies the same technology as a big company. That gets rid of the technology advantage, and that’s a huge change.”

Rather than thinking of the cloud — computing capability delivered over a network — as a type of technology (because there are at least three dozen categories of cloud computing), Braat recommends seeing it as a way of delivering consumer technology.

Many small businesses typically don’t have an IT staff or technical expertise in-house, so folks making decisions don’t always know what questions to ask about their company’s tech infrastructure, Eric Diamond, CEO of Tribeca Cloud, a company that helps small businesses understand how to implement cloud services, said.

“One of the biggest things we see is that they don’t define the requirements of their business needs,” he said. “What are you trying to obtain? Do you want to save money, use a new application, access an enterprise-level app? Then you have to do your research.”

There are four deployment models of cloud: Public (available to the general public over the Internet), private (within a corporate firewall), community (shared between organizations) and hybrid (a combination of the three).

Braat said benefits of the cloud are that it is on demand; burstable, meaning a lot of it can be used; elastic, can use very little; and metered, so a business only pays for what it consumes. In addition, businesses that use the cloud have seen employee productivity increase, which in turn drives innovation and speeds technologies to market, he added.

Levin said the public cloud is a “game changer” for small businesses because it gives them access to enterprise-level applications. The private cloud is reserved more for larger companies that have their own IT staff, data centers and are investing large amounts of money in infrastructure, like computers, to increase the flexibility of assets.

Small businesses don’t have any of those things typically, and therefore don’t need access to all of that technology, he added.

However, for businesses that like the idea of a private cloud, Levin said there are private clouds hosted by companies like Rackspace, Amazon and Microsoft that give small businesses their own dedicated equipment on a dedicated network; so in a sense it is private, but the company wouldn’t have to keep all of that in-house. He cautioned, however, that it requires companies to write their own software and applications.

Saas is predominantly used for office productivity such as email, word processing, crunching numbers, online file sharing and basic forms of communication, not to mention security purposes (i.e., downloading spamware, malware and intrusion protection software). Iaas functions like storage and computing, Braat said. It can be used to store intellectual property like documents, drawings, applications and code proprietary to a business.

“Typically, technologists think about Iaas in scenarios, such as what can I do for backup in the event of a disaster,” he said. “Small businesses are getting to the point where they no longer store documents locally in anticipation of an unforeseen event, so while performing disaster recovery, they can get to them quickly and inexpensively.”

Platform as a service, meanwhile, can be used to develop and run a website in the cloud or build applications.

CDW’s market research shows that security, performance and integration are the barriers most often cited by small businesses.

Despite the issues, customers are indicating a steep growth in implementing cloud technology of between 27 percent and 39 percent year-over-year, he added.

“It’s less relevant what technology is being used, but more relevant if the services are using well-known brands,” Zanni said. “That way, you are comfortable that the technology is the latest, the best brand, the most efficient and most secure software. Owners should care about what the cloud is doing to enable them to focus time on customers and make them happy.”

One step at a time

While there are lots of technologies that make up the cloud, he cautions owners not to think they have to do everything the cloud has to offer or none at all.

“Take it in over time,” he added. “Many of the services have a try-before-you-buy model which is a good way for small businesses to test the waters without taking on too much risk.”

Just like any other new product or service, Tribeca Cloud’s Diamond said small companies should do their due diligence. One of the pitfalls is relying on third-party services to tell business owners what they should be using. Another is providers trying to push a long-term contract.

“Some Saas providers will try to get businesses to use their proprietary software, but on a long-term contract,” he said. “You need to be looking out for a service that is month-to-month. Let them prove they are doing what they say they are doing.”

There are perceived trade-offs for the cloud that include control and security, but really there aren’t any depending on business, said Box’s Levin, who has worked with small businesses and the cloud for six years.

“Realistically, those companies are going to get much better security, reliability and performance with much lower costs and hassle,” he said. “I’ve see a number of small businesses lose data because it wasn’t backed up or living on an old machine slid under the desk of some manager.”

Today, companies can trade that in for the cloud and get world-class infrastructure maintained by some of the best companies on the planet, and get it for $50 a month or less, Levin added.

If a company does it right, cloud services will enable them to get enterprise-level information technology at a cost that is aligned with their own business model, Parallels’ Zanni said. Because cloud is pay-as-you-go, owners may pay between $5 and $10 per user versus several thousands of dollars for servers and specialists to run them.

Another benefit is being able to reach out to employees and customers, collaborating in ways a company could not before, such as using a webpage and online chatting function to expand a company’s reach, he added.