Founded 11 years ago in Singapore, payment solutions provider 2C2P (which stands for Cash and Card Payment Processor) had announced its partnership with Myanmar Citizen’s Bank (MCB) last July with a joint venture. 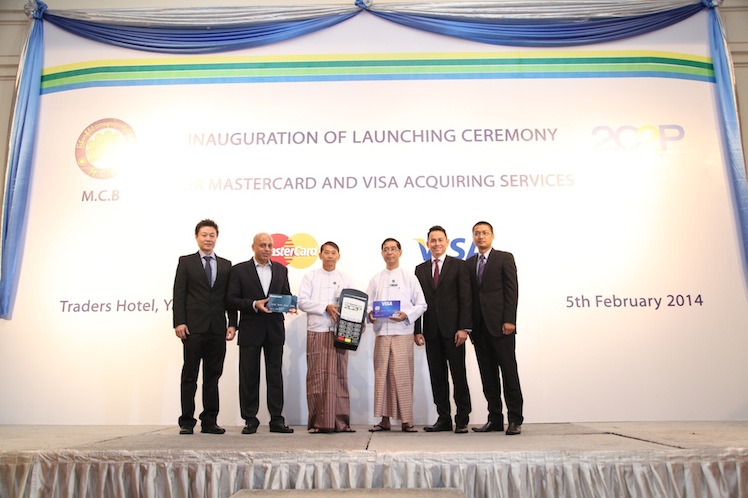 Yesterday marked the company’s first step in bringing payment processing capabilities into Myanmar with the launch of its new point-of-sale (POS) system, which will allow merchants to accept major international payment cards such as Visa and MasterCard. The complete solution will include the ability to view real-time reports online, pre-authorisation for call centre sales, and a slip which comes with a merchant logo.

2C2P claims that the solution runs on PCI DSS (Payment Card Industry Data Security Standard) Level 1, which is endorsed by major card brands such as Visa, MasterCard, American Express and JCB. The PCI DSS framework requires merchants to store, process and transmit cardholder information securely, and Level 1 is the highest standard of security recognised by the payment industry.

U Myint Win, Managing Director, MCB said that the two parties have been working together for the past six months to perfect the POS solution.

Aung Kyaw Moe, Founder and Group CEO of 2C2P added that there are plans to launch more products in the near future in Myanmar, whose economic growth is seen to be moving at a rapid pace.

As for the card companies, Visa’s Country Manager for Myanmar and Thailand, Somboon Krobteeranon said that they are committed to supporting the development of Myanmar’s financial infrastructure. Such infrastructure also provide benefits to international travellers looking to set up shop in the emerging country.

“The rollout of point-of-sale terminals by Myanmar Citizens Bank will benefit international visitors looking for convenient and secure payment channels when they arrive in Myanmar and help manage the huge  demand that visitors are placing on the country right now,” said Antonio Corro, Country Manager, Myanmar and Thailand, MasterCard. “But beyond that, this roll-out will also benefit the merchants themselves as they will be able to have real-time reports on transactions made, allowing for better monitoring and control, which is definitely one of the key benefits of electronic payments,” added Corro.

2C2P receives US$2 million in funding

It’s a strategic partnership, said Aung, referring to the funding, and reiterated in an email to this author that the entire Series B is a “strategic round”. 2C2P recently made news as ‘Paypal competitor’ when it received a US$1.5 million investment from an undisclosed investor and another US$500,000 from Japanese firm GMO Payment Gateway six months ago.

While Aung declined to reveal who the mystery investor is, he told e27 that “they are similar to GMO”, but larger in size. He said, “GMO Payment Gateway has a lot of good Japanese companies as its customers. These Japanese companies are now expanding their business into Southeast Asia. GMO would like to partner with local payment companies to continue to service existing customers. As a local payment company, we are getting good leads from GMO. It is a win-win partnership.”

At the moment, Thailand still stands as 2C2P’s biggest market in terms of transactions. However, the company is said to be “gaining ground in Myanmar and Indonesia“.

The funds will be used for expansion purposes in three dimensions: product, region and human resources. Aung said that the company has added more effort in hiring talents in areas it needs a boost, such as marketing, public relations and sales.

In the year ahead, he claimed that there will be a launch nearly every month. The launch can be for an existing product in a new market or an entirely new product itself.