Embrace cloud or be the king of legacy?

For all the talk about devising BYOD strategies there is a simple truth that can’t be ignored: Employees are using their personal smartphones and tablets for work whether they have official blessing to do so or not, and most likely are connecting to the corporate network without caring about official sanction. 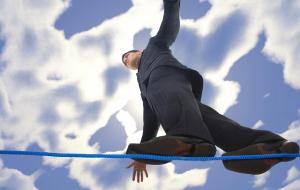 And if Telstra’s Lalitha Biddulph, the telco’s enterprise and infrastructure services IT director, is to be believed, that’s not a million miles away from the situation many enterprises find themselves in with cloud.

While the IT organisation might be wringing their hands over the security implications, appropriate governance processes and cost-benefit of cloud, chances are there are employees outside IT who are happily signing up for SaaS, PaaS and IaaS.

But when something goes wrong, it’s still IT that has to face tough questions from the rest of the business. That was Biddulph’s experience when a ‘shadow’ cloud-based integration service went down: She started receiving complaints about an order system backlogging, despite her dashboard showing all green.

Biddulph has faced a formidable challenge managing Telstra’s internal IT , which delivers infrastructure for the telco’s 39,000 employees. The perception from the rest of Telstra was that Enterprise Services was too slow, to expensive and too difficult to engage with, Biddulph told Gartner’s Application Architecture, Development & Integration Summit in Sydney.

It is these kinds of perceptions, and the more than likely reality underpinning them, that IT leaders need to take into account when dealing with other departments doing an end-run around IT to deploy cloud services.

CIOs face a stark choice, Biddulph says: Embrace cloud or be the king of legacy by trying to crack down on the spread of *aaS. For Biddulph, a self-described ‘cloud zealot’ who was dealing with capacity on demand before the term cloud was even coined, that’s no choice at all.

Biddulph acknowledged that the shift could be unsettling for IT. She said that she would often get asked by people if IT still had a role to play. “Now you’re buying everything what is the value I’m adding?” Biddulph was asked.

“What I tell my team is you have to start looking at cloud as an extension of your IT department now. Whether it’s a SaaS cloud or a PaaS cloud you’ve lost it already. There’s already people in your organisation out there talking to SaaS providers … they do this in their day to day lives why wouldn’t they do it in their work lives?”

The shift to cloud means that IT must embrace the idea of being the “expert brokers” Biddulph said. There must be a cultural change in IT: IT needs to make sure that it is putting itself in the customer’s shoes, and actually finding the value proposition for its internal customers.

“Hone in on making sure you’re delivering that value and not worry about all the peripheral things where you may or may not make a difference but you want to build because that’s what you’ve traditionally done.”

At the same time, IT must also convince people in the business that IT still serves an important role, because it is IT that will be there when something breaks or an unexpected privacy issue rears its head.

“But it needs to be as a supportive partner,” Biddulph said. “Not a ‘you can’t do that and if you want to do that I’ll see how you fail and then I’ll tell you I told you so’. Not going to work. I think your role really has to be an enabling broker, as somebody who really brings that value back to your developers, saying ‘here’s an idea of how you can deploy your solution faster; here’s what I can automate for you. You know what that piece you do manually? Let me automate that for you, along with the VMs that I stand up for you.”