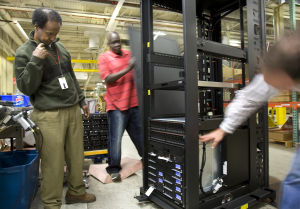 At its InterConnect conference in Singapore this week, IBM rolled out cloud-related products that include new or updated models of PureFlex Systems, Power Systems, Smarter Storage Systems and System x.

“The growth of the cloud is just incredible right now. And from a Rochester perspective, we’re right in the middle of it,” said Tim Alpers, the product manager for IBM’s PureFlex Systems. “We have key aspects in our systems group with PureFlex and Power here.”

Cloud computing is an umbrella term that refers to providing computer services via the Internet, such as Dropbox storage. It also is used to describe distributed computing over a network and providing services via scalable “virtual servers” simulated by software systems.

Alpers estimates the majority of the Rochester employees were involved in some way with these cloud-related projects.

Cloud computing is a complex process that involves multiple types of computers and software programs working together to serve a variety of users. Creating a product that does multiple things at once to provide a simple solution for a customer is familiar ground for Rochester’s IBM team.

“Clients are looking to the cloud to handle their IT needs, but how do you put it all together and manage it efficiently?” he asked. “That’s where Rochester comes in. Ever since the AS/400 days, we’ve always been about delivering applications, delivering solutions.”

The cloud computing market is estimated to grow by 36 percent annually to reach a value of $19.5 billion by 2016.

“The vendor that can most efficiently and effectively deliver that total hybrid cloud environment is going to be the winner in the marketplace. That’s why IBM is putting a ton of muscle behind this space,” Alpers said. “It’s varied, and this includes a lot of different capabilities, but underneath it reinforces those two key trends.”

The competition is hot, with Amazon, Google, Hewlett-Packard, Dell, Oracle and Cisco all battling IBM in the market.

In some ways, cloud computing cuts into traditional computer sales, which was one reason a Barclays analyst downgraded IBM’s stock price target from $215 to $190 on Monday and ranked the stock as “equal weight,” down from “overweight.”

“We believe the cloud is really driving the demise of hardware, services and software revenue throughout IT, including IBM. With each customer that deploys (cloud technology), future revenue streams from IBM become more difficult to tap,” according to the Barclay report. “We believe the rise of the cloud really hurts growth in IBM’s Software division but also impacts consulting and other services revenue tied to integrating its software stack as well.”

Gartner, the technology market research firm, ranked IBM as 15th in cloud computing in August, with Amazon as the runaway leader of the pack.

IBM’s Rochester site employs an estimated 3,000 people, although the company won’t confirm the exact number. The site has taken several hits this year, including an announcement in March that manufacturing would be shifted from Rochester to Mexico and other sites, which would cut an estimated 200 jobs. More layoffs were announced in June after a poor first quarter report, and furloughs for some employees were announced in August.