Cloud computing means being able to access the Internet anywhere, anytime and being able to use any or all of the data and applications you want. The issue may never be settled but there are some areas of agreement: mainly, how it works and who uses it. 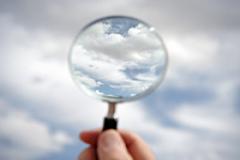 The official definition from the National Institute of Standards and Technology reads: “Cloud computing is a model for enabling convenient, on-demand network access to a shared pool of configurable computing resources (e.g., networks, servers, storage, applications and services)that can be rapidly provisioned and released with minimal management effort or service provider interaction.”

Translation? Accessing the Internet anywhere, anytime and being able to use any or all of the data and applications that you want.

So when the technical jargon is stripped away, cloud computing can be grasped on its basic level- anytime, anywhere computing on your MAC or PC-without the user ever having to know much about the technology.

How Does It Work?

In simplest terms, cloud computing involves delivering hosted services over the Internet. The service end is where the data or software is stored and the user end is a single person or company network.

“Cloud computing minimizes the hardware, like memory, and application requirements, like word processing, for the users and pools those resources in the ‘cloud,” says Danny McPerson, CSO of Verisign .

So, a company in the business of hosting has specified data stored on its servers, a user fires up their computer, connects to the web (and to the servers holding their data), clicks on their application software and away they go.

What is somewhat mind-numbing are the kinds of storage systems services used in cloud computing. There are three basic ‘alphabet soup’ levels of storage capabilities, but there’s no real need to go into those here. Any or all three can be offered by the same provider-for a price.

And there are so-called public, private or hybrid clouds; public meaning the data is accessible to anyone, private being subject to a company’s firewall or security system, and hybrid, which combines both public and private.

But it’s fairly safe to say that most users are more than likely to be content knowing their data is stored somewhere other than their computer and they have access to it whenever and whereever they go online.

You are probably using it right now. If you use email, or go to a social network and post photos, access online document software, or use your company’s hardware/software, you’re probably using the cloud. You may also use it to store online tax or financial records. You can also use cloud computing to back up files for storage off your PC or Mac.

Cloud computing has certainly gone mainstream. Firms who use cloud computing say they like it because it cuts IT costs while modernizing their technology infrastructure.

Hotels use it for consumers to make reservations and a major electronics retailer is using it to fill their online orders. Sending a picture to a Facebook friend or tweeting out your latest thoughts?You are headed for the clouds.

Where Did Term Cloud Computing Come From?

The concept of cloud computing dates back to the 1960’s. The phrase originates from the cloud symbol used by flow charts and diagrams to symbolize the Internet. The diagram to the left underscores the idea that any computer connected to the web has access to a pool of computing power, applications and files.

The first reported public use of the term came in August of 2006 at a search engine conference in San Jose, Calif. when then Google CEO Eric Schmidt described one approach to data storage as “cloud computing.”

But in a sign of the ever-competitive Internet wars, research shows that Schmidt may have been trying to pre-empt Amazon ,which was about to release its Elastic Compute Cloud system later that month.

Dozens of firms are providing ‘clouds’ in the U.S. and other countries . They generally fall into three categories of service: software, storage and computing power, or platform providers that give site developers tools to build and host applications. Some do all three. Big or small, all see this as a natural way to make money in a very competitive field.

Some names might be surprising as they may be better known as content providers or consumer sites. Here are just a few of the major players:

Dropbox:a file hosting service offering storage, file synchronization and client software. Started in 2007, Dropbox allows users to create a special folder on each of their computers, which the company then synchronizes so that it appears to be the same folder (with the same contents) regardless of which computer is used to view it. Files placed in this folder also are accessible through a website and mobile phone applications.

Amazon: considered one of the innovators in cloud computing since it began offering services in 2006. Amazon has thousands of small business and individual users along with customers like the New York Times and Eli Lilly .

Google: in what might have been a strike again Microsoft , the internet search giant launched Google Apps in 2007. Customers include small businesses and colleges like Northwestern University.

Microsoft: the tech giant has made its windows operating system available with cloud computing through the Azure program. Microsoft also offers various business services. Customers using the program include Epicor and Micro Focus.

Salesforce.com: started in 1999, Salesforce is considered a pioneer in cloud computing, with its software as a service product. Customers include financial services, media and health firms as well as retail companies.

GoGrid: the Canadian based firm is privately held and said to be one of Amazon’s chief competitors in cloud storage. Customers are mostly start-up firms and a few bigger companies like Novell.