One of the most common images of this week’s hurricane, power-sharing: People huddling with their phones and laptops plugged into power strips set up in bank foyers, coffee shops, or dangled helpfully out windows. But the storm hasn’t just shaken up the east. We got a note from a listener a thousand miles from the flooding in New York and New Jersey. 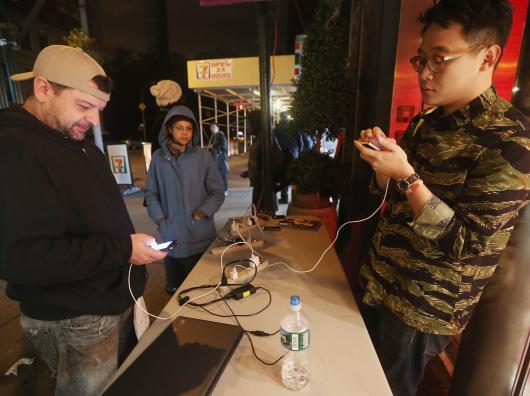 Katryn Conlin designs websites in Minnesota, but she and her clients were using Squarespace — a web company with its bank of computers in power-starved Lower Manhattan. Squarespace employees have kept a blog of their valiant efforts to stay online, including a bucket brigade to get diesel fuel up 17 flights of stairs to a generator.

Katryn says this has taught her something about so-called cloud computing, “I’ve always visualized a cloud, I mean I think we all do, as being fluffy white air we can access things through it — our Facebook and our Twitter and our Tumblr accounts. But it really turns out it’s a physical thing — it’s a place.”

What about larger companies that use the “cloud”– keeping data and computing power online so it can be used anywhere? Netflix learned a tough lesson during a big system crash in 2008.

“Since then we’ve moved essentially all of our infrastructure — all of our computing and data storage — into the cloud,” says Neil Hunt, product manager at the company. He says Netflix’s version of the cloud uses lots of redundancy — multiple data centers in countries around the world. And there’s the “Chaos Monkey”: “The Chaos Monkey is our name for a piece of software that runs on the computer that randomly terminates instances in our system. So we make sure that we are practicing failure on every system every day in a way that exercises all of our failure recovery mechanisms.”

It’s like a digital version of Kato from the Pink Panther movies, always ready to put you to the test.

Which opens up the possibility the ban might be used not just for material that endangers kids but also against political opponents. To do this, Russians are using a technology that governments in the west are not supposed to rely on because of privacy concerns. It’s called DPI, Deep Packet Inspection, a system that allows officials to look at the content of the data, not just where it comes from or where it’s going.

First data service “providers” and now the Russian government. DPI was originally designed to spot when people were illegally downloading movies or using Skype as a way to get around paying long distance charges.