Cloud computing has gone from concept to mainstream computing and in the process some mainstream enterprise computing companies are having a tough time with the transition. 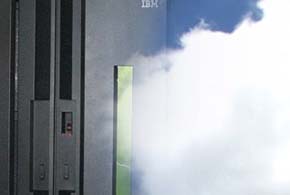 IBM is the most recent example of a company trying shift to the cloud while watching its hardware revenues fall off the cliff. In the company’s latest quarter and year-end financial report, the precipitous decline in hardware revenues was glaring with a decline of 26 percent to $4.3 billion from the comparable quarter a year earlier. The declining fortunes of the hardware business has led to rumors, still unconfirmed but widespread, that IBM is looking to jettison its low end x86 server business to Lenovo or maybe Dell or even to Fujitsu. While the scenario of getting out of the server business might seem reminiscent of IBM’s exit from the PC business in 2005, this time is different. IBM exited the PC business because the software and services industry held the promise of high growth, high margins and no overwhelming competitor.
The cloud computing business where IBM is pinning its hopes for the next growth cycle does indeed promise high growth, but the margins are razor thin and Amazon Web Services is a commanding presence in the infrastructure segment of the cloud and Salesforce.com holds a similar position in the software as a service segment.
IBM, like the other older, established tech vendors including Hewlett-Packard, Microsoft, SAP and Oracle, are all shifting to cloud-based offerings. However, those vendors all grew up in an era of software sold and maintained on a yearly basis and hardware sales marked by regular upgrade cycles driven by Intel’s latest chip advances. Those days have now changed with software sold by subscription, the infrastructure as a service providers developing their own hardware systems built to their specifications by white box suppliers and pricing models derived from retail and advertising backgrounds. Competing against other traditional vendors is a genteel endeavor compared to taking on Amazon Web Services or Google. But taking on AWS or Google or Rackspace or DigitalOcean is what IBM and its traditional competitors will have to do if they intend to find the revenue growth path expected of technology companies. IBM signaled its cloud intentions in 2013 when it purchased SoftLayer last June for a reported, but unconfirmed $2 billion. That investment was recently buttressed by another $1.2 billion investment to build out 15 additional data centers worldwide. BusinessWeek reported the SoftLayer operations have added about 2,400 customers since the acquisition on top of the 20,000 pre-acquisition customers. In addition, IBM said it will invest an additional $1 billion in taking its Watson artificial intelligence operations from the laboratory to a cloud-based service. While those billions in investment will provide a base to attract additional cloud customers, IBM needs to articulate how it will both differentiate its cloud offerings from the likes of AWS, Google and Microsoft while demonstrating a capability to add additional services and cutting prices at an Amazon-like pace.
I recently met with a CEO at a startup developing enterprise encryption techniques for companies where users are storing data in storage services such as Dropbox, Box and Google Drive. He is a veteran of four enterprise software startups and this time he is using an all-cloud infrastructure rather than laying out money for a data center packed with servers. His current infrastructure costs are measured in the thousands rather than hundreds of thousands of dollars. He isn’t going back to the buy-your-own server model and represents an example of why IBM’s hardware business is in rapid decline right now. Whether IBM can attract his interest in his next startup will be a good gauge of whether the IBM cloud bet will start to generate the growth lost with the hardware decline.
Share this
0 likes
Related Articles
0 Comments