In the cloud, it’s a question of who has the ability to scale to meet enterprise needs

It wouldn’t be a mischaracterization to equate the cloud computing industry to the wild, wild west.

There is such a variety of vendors gunning at one another and the industry is young enough that true winners and losers have not yet been determined. Amazon has established itself as the early market leader, but big-name legacy IT companies are competing hard, especially on the enterprise side, and a budding crop of startups are looking to stake their claims, too. 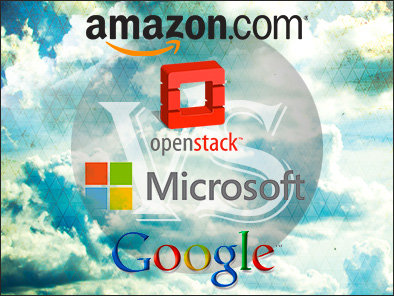 In its latest Magic Quadrant report, research firm Gartner lists 14 infrastructure as a service (IaaS) companies, but Network World looked at four of the biggest names to compare and contrast: Amazon Web Services, Rackspace (and OpenStack), Microsoft and Google.

It’s hard to find someone who doesn’t agree that Amazon Web Services is the market leader in IaaS cloud computing. The company has one of the widest breadths of cloud services – including compute, storage, networking, databases, load balancers, applications and application development platforms all delivered as a cloud service. Amazon has dropped its prices 21 times since it debuted its cloud six years ago and fairly consistently fills whatever gaps it has in the size of virtual machine instances on its platform – the company recently rolled out new high-memory instances, for example.

There are some cautions for Amazon though. Namely, its cloud has experienced three major outages in two years. One analyst, Jillian Mirandi of Technology Business Researcher, has suggested that continued outages could eventually start hindering businesses’ willingness to invest in Amazon infrastructure.

That sentiment gets to a larger point about AWS though – the service seems to be popular in the startup community, providing the IT infrastructure for young companies and allowing them to avoid investing in expensive technology themselves. But Mark Bowker, a cloud analyst for Enterprise Strategy Group, says Amazon hasn’t been as popular in the enterprise community. “Amazon’s made it really easy for pretty much anyone to spin up cloud services or get VMs,” he says. Where is Amazon getting those customers from? Some are developers and engineers who get frustrated by their own IT shops not being able to supply VMs as quickly as Amazon can, so they use Amazon’s cloud in the shadows of IT. “Taxi cabs pay for a lot of VMs,” says Beth Cohen, an architect at consultancy Cloud Technology Partners, referring to users expensing Amazon services on travel reports. The point is there’s a hesitation by some enterprises to place their Tier 1, mission critical applications in a public cloud.

Amazon is looking to extend its enterprise reach though. In recent months the company has made a series of announcements targeting enterprises and developers. It rolled out Glacier, a long-term storage service, while it’s made updates to its Elastic application development platform and its Simple WorkFlow Service, which helps developers automate applications running in Amazon’s cloud.

It has expanded partnerships as well, including with private cloud company Eucalyptus, allowing customers to create hybrid clouds that span their own data center and Amazon’s cloud. Amazon has also forged new agreements with BMC and F5, which add on top of the robust marketplace of software applications that are already available on Amazon’s cloud. More partnerships expected into the future could push Amazon further into the enterprise market.

Behind Amazon, the rest of the market could be described as “everyone else,” but there are some leading candidates to take on Amazon in the cloud and one of the strongest is Rackspace. Powered by the OpenStack cloud computing platform, Rackspace is positioning itself as the open source alternative to Amazon, and the company’s executives make no shame in aiming critiques directly at its chief competitor.

Bowker, of Enterprise Strategy Group, says Rackspace has a leg up on many of its other competitors because of its history as a managed hosting and collocation provider. It’s been in the enterprise business before.

Others believe that Rackspace’s OpenStack involvement allows it to compete at the scale and capacity of Amazon. Rackspace is attempting to build a cloud that can scale to just about anyone’s needs, says financial analyst Pat Walravens, and he believes with the OpenStack backing the size of deals that Rackspace is able to land will only continue to increase.

“If Amazon is going for scale, cost and breadth of services, Rackspace is going for its services, including what it calls its fanatical support for customers,” says Forrester analyst Dave Bartonelli. “They’re really trying to make the play that they’re the safer enterprise choice and with OpenStack, they want to be known as the non-Amazon.”

The open source aspect of Rackspace’s cloud appeals to customers concerned about vendor lock-in, Bartonelli says. An open source architecture may give customers additional freedom to move workloads among OpenStack-powered clouds, although Gartner has disputed the significance of that.

One Rackspace strength is its ability to roll out the latest and greatest OpenStack features. The latest OpenStack code, for example, incorporated virtual networking capabilities, which Rackspace has since rolled out, and hopes to advance the functionality of it in the coming months.

There is a view by some though that Rackspace has married itself to OpenStack, perhaps to its own detriment. As the Gartner report on OpenStack states, OpenStack can be successful independently of Rackspace’s success now that the company has ceded control of the project to a foundation. Overall, Bartonelli says Rackspace’s involvement in OpenStack is positive for the company and will only help to position it as a leading alternative to Amazon.

Microsoft is inherently part of most conversations regarding enterprise IT, says Bowker. “I’ve been super impressed with the level of knowledge enterprise IT shops have with Azure,” Bowker says about Microsoft’s cloud platform, which he says is still maturing. “People are keeping tabs on what’s going on with Microsoft, so the company really has a halo effect on any conversation we’re having with clients.”

And for good reason, he says. Microsoft owns a lot of back office IT operations for enterprises between Office, Exchange and SharePoint. Because of that real estate the company already has in the enterprise market, Microsoft has an opportunity to extend those customers into its cloud, Bowker says. Microsoft has been more aggressive than ever in recent months about encouraging customers and partners to join its cloud. Earlier this year the company rolled out on-demand Windows and Linux-based virtual machines and cloud storage to accompany its platform as a service as well.

Combined with the release of Windows Server 2012 and Windows System Server this year, Microsoft is also making a play for powering private clouds behind a company’s firewall. That will help Microsoft craft a story for customers to have hybrid cloud deployments all powered by Microsoft and its Hyper-V virtualization software. “Amazon doesn’t have as strong of a play in the hybrid cloud conversation,” Bartonelli says, which – combined with Microsoft’s strong relationships with a large number of enterprise IT shops – could be an advantage for the company moving forward.

If anyone can compete with Amazon on scale, it’s Google, says George Reese, founder of enStratus, a cloud management company. Amazon may have the largest scale in the industry, which Rackspace is attempting to match. But Reese says Google has a lot of data centers that are optimized for massive scaling, which is heavy artillery in cloud battles.

Google’s play thus far has been focused on application development and hosting. It got into the game with Google App Engine, a development platform, and has since – like Microsoft – expanded into the infrastructure-as-a-service space with Google Compute Engine, giving customers an on-demand virtual machine and storage service. It also has a consumer cloud-facing service in Google Drive, seen as a competitor to Microsoft’s SkyDrive.

“Google’s not trying to displace Microsoft or Windows developers, nor are they necessarily trying to displace Rackspace,” Barontelli says. “They’re really going directly after Amazon on pricing and capacity saying ‘Hey, we’ve got scale too.'”

But Amazon’s been in the cloud game longer than Google, and both companies suffer from a lack of perceived support for users. But the strengths of Google’s platform, and its activities in the startup community, could make it a viable competitor in the cloud market.