The video service now lets users keep their anonymous names while still connecting to a Google+ account. In fact, users can even change their Google+ name to match their YouTube channel.

YouTube began gently prodding all users operating under nicknames like cutepuppies99 and origamiboys1981 to start using their real names last July. It did this by urging them to hook their Google Plus profiles up with their YouTube channel and therefore, by default, they’d have to use their real names. 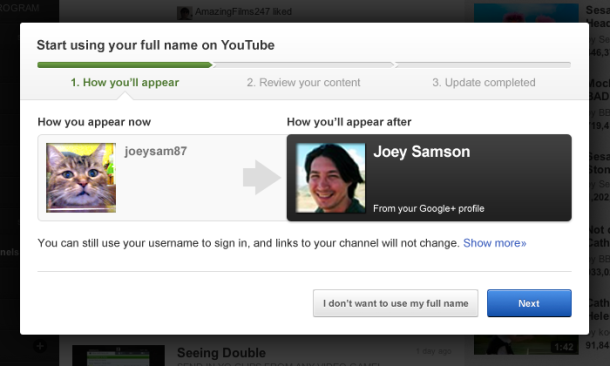 “While using a full name from a Google+ profile might work well for a creator who wants to build their brand as an individual, this simply doesn’t work if you don’t want a full name on your channel,” YouTube’s David Boyle wrote in a blog post today. “If you run a channel with a name like BlueXephos or VlogBrothers, you should create a Google+ page (as opposed to a profile) with that name.”

It’s unclear why YouTube had a change of heart. It could be because people weren’t linking their Google+ accounts to YouTube or maybe the tech giant received user requests for this option.

The integration of Google+ and YouTube has been taking place over the last year, and while some users must appreciate it, others have gotten annoyed. In May, actor Wil Wheaton ranted about Google “forcing” its social network on everyone when he tried to like a video on YouTube and instead got a prompt to join Google+.

According to Boyle, linking the two accounts helps users build their audience and brand. “If you unify your YouTube identity with Google+, it will be easier for your audience to find and connect with you on YouTube, Google, and across the web, and it will help you build your brand across all of Google’s products,” he wrote.

The new YouTube and Google+ identity options will roll out within the next few weeks.