Why startups & enterprises in Asia should invest in UX

UX (User Experience) is not such a strange term in the west, as compared to the Asian region. Many IT giants like Apple, IBM, Amazon and Facebook are well-known for delivering great user experience. 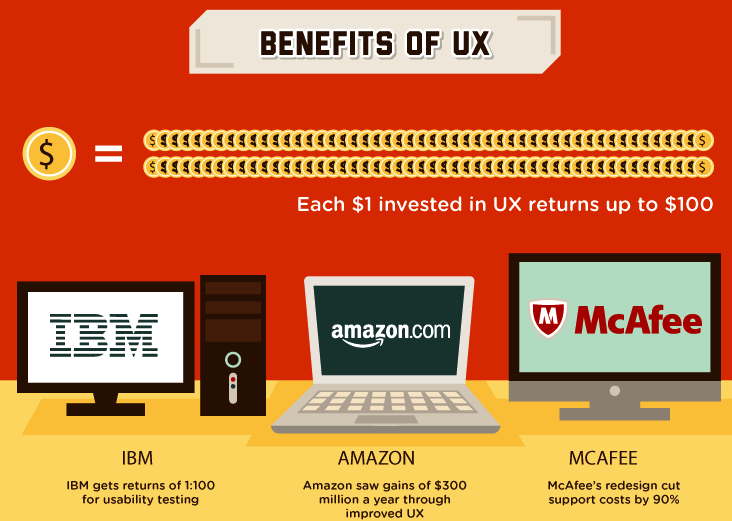 Undoubtedly, UX has recently becoming a buzz word in Asia, thanks to continued promotional efforts by the local UX community. Yet, many UX practitioners still find it difficult to ‘sell’ the idea of UX to enterprises even in developed Asian countries like Singapore and Taiwan. Many have misconceptions and thus, misuse the term, ‘UX’. I always hear from founders that they understand the importance of UX and that they have a great UX designer/team but after further discussion, I come to realise that the mentioned ‘UX team’ does only graphic user interface design. I do not claim to be a ‘know-it-all’ when it comes to the correct definition of UX, but I am pretty certain that it is safe for me to enlighten you on the fact that UX IS NOT UI. (You may read a very interesting article that explains why UX is not UI here).

My intention of writing this article is to encourage you to start taking approaches to be customer or user-centric, be it for your product or your company (corporate culture). Startups, often like big enterprises, omit investment in UX as they think that marketing, HR, operations and everything else are more important. People always think that the major downfall of their business/product is due to the lack of marketing or funding, taking for granted that their idea or product is already well-optimised.

But is your product ‘well-optimised’ for You or for your Users?

Two startups in Asia that caught my attention have been using UX as a great weapon to shape them to a different level of game play, the level of ‘competitive advantage’: 9GAG from Hong Kong & Whoscall from Taiwan.

9GAG
9GAG, created in year 2008 is now possibly the most popular humour website with millions of daily users. The co-founder of 9GAG, Ray Chan was the keynote speaker of Echelon Ignite Thailand 2013. Apart from sharing his aspiration of making people happy by using the power of ‘humour’, I recalled that he shared some startup tips:

“You should test your product with your users, understand how they use it and improve it”

Chan mentioned this not once, but many times. I was surprised that this advice was not an item shared by any of the speakers from the e-commerce and other customer service oriented fields, rather, from a co-founder of a crowd-sourced online humour site.

I believe that paying attention to its users is the main reason behind the astounding number of 9GAG’s strong user base: over 8 million Facebook likes, 2.3 million Twitter followers and over a million Google+ followers. I told a friend about this, and his response was,

“I don’t think so, 9GAG’s key strength is certainly from their viral contents. I don’t hear anyone saying their website or mobile app is easy to use”.

Good designs are obvious, but great ones are transparent, discreet and silent. I too, do not expect people to express blatantly on how user friendly a product is. For me, a website or mobile app is user friendly when it requires less effort and minimal thinking to complete a desirable task. Aside from great content, do not forget that context is very important, especially for the users. Also, bear in mind that a design that looks simple does not necessarily mean that it will be easy to use.

Whoscall case study
I am glad that I had the chance to meet the COO of Gogolook (the company behind Whoscall), Edgar Chiu, a very humble guy during Global Startup Youth. I then started paying attention to the startup and its trademark product ‘Whoscall’ – a mobile app that helps to track and block unwanted calls, which received more than 4 million downloads around the world. Two months later, I read the news that the Korean web giant behind LINE Messenger, Naver acquired Gogolook, the team behind Whoscall for about NT$ 500 million.

Whoscall has re-branded as ‘LINE Whoscall’ with its iconic LINE green color background. Image Courtesy: Inside

Whoscall received a number of awards including ‘Google Play Best Apps of 2013’ in 8 countries. The Whoscall team is well known in Taiwan for their emphasis on listening to their users. The team regularly conduct user interviews to understand user behaviours and how users interact with their app. From their Facebook page, their Facebook admin responded almost every single comment from users.

For startups seeking global expansion, it is also crucial to understand that user acceptance level varies across regions and countries, mainly because of language barriers, cultural differences and the adoption stage. While tracking remotely, your analytic numbers provide you with facts & figure insights, but that is not enough for you to understand why users are falling. User testing and user interview is the way to understand the reason of why users abandon your product. Let’s take the Whoscall team as an example, when they faced a sudden drop of users in the Middle East, they took their users seriously, regardless of where they from. While designing their app, they spent hours trying to understand the local user requirements and proceeded to make amendments. If one observed closely, the app icon that appears in the Middle Eastern regions look different from other countries in order to make it easier to be recognized and understood by the locals.

Through partnership with LINE Corporation, they are now ready to roll out their apps for free, so that everyone can enjoy their services. In addition to that, they did not forget their loyal users who paid to use their services. Hence, they officially announced that refunds will be made to their initial paid users. In my opinion, they certainly did pretty well in their overall business aspect, which stirs up ‘word-of-mouth’ by its users consequently stimulating their massive growth. To date, both 9GAG & Whoscall received high ratings by users on Google Play store.

UX Fund
In 2006, a UX design agency Teehan + Lax in Canada went on to experiment by investing $50,000 (they call it the UX Fund) on 10 companies that focuses on UX. They invested in companies such as Apple, Google, Netflix and Yahoo. Teehan + Lax intended to sell the stocks after 1 year. However, in the first year, the UX Fund already raised by 39.3%. After four and a half years, it went on to increase by 101.8%. This shows that businesses that put resources behind their customer experience do get their return of investment.

Some final thoughts
Investing in UX should not be your last option, instead, it should be among the first few things that you should take care of rather than spending thousands of dollars on marketing and product improvement before even understanding your users. Irrespective of company size, companies should get inspired by the users and stay connected with them. This can be done through a simple user interview or user test that is affordable to any startup. Of course, making a product beautiful is great, but you should focus on usefulness and usability first, then only desirability. It is also advisable to have the ‘user-centered’ mind-set because corporate culture is hard to tweak when a startup company grows bigger. So adopting user centred mind-set early in a company will be easier than adopting it at a later stage. This is not because people resist change, but they resist being changed. UX practice is never the sole responsibility of a designer, but everyone in the team. Practicing UX, doing user research and testing is not about looking forward to the ‘West’, but it is what every business should have done in the first place.