Don’t expect a resolution to the Web standards fracas next year, but high-res images will happen, and new browsers might carve out a niche.

The evolution of the Web is a messy process.

We do so much with the Web today that it’s easy to take it for granted. Banking, social networking, word processing, travel planning, education, shopping — the Web is reaching to new domains and tightening its grip where it’s already used. To match that expansion, the Web is evolving. 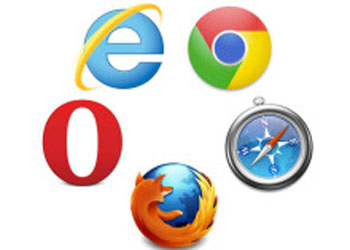 But the Web is built by countless individuals — browser engineers who enable new technology, Web developers who bring that technology online, and standards group members who iron out compatibility wrinkles. With so many constituents, it’s no wonder there’s so much craziness in charting the Web’s future.

The new year will bring new chaos on the Web, and things will be sorted out in only some areas. Here’s a look at what’ll settle down in 2013 — and what won’t.

iOS comes with Safari. Windows Phone comes with Internet Explorer. Android comes with its own browser and, for Android 4.x users, Chrome. It’s a very different way of doing things compared to the browser free-for-all in the PC market.

In 2013, though, there’s a chance people will exercise choice where they can and reject a future where browsers end up being effectively locked to the mobile OS.

The forces for lock-in are strong, if for no other reason that it’s just simpler to use a smartphone’s built-in browser. But don’t forget — there was a day when IE ruled the desktop browser world. In 2012, programmers laid the groundwork for big-name alternabrowsers.

Today, the companies that control the mobile operating systems — Apple and Google — lead the race for mobile browser usage.

We saw the arrival of Chrome on iOS and the reboot of Firefox on Android. iOS and Windows Phone place restrictions on third-party browsers, but Android is open, and other browsers there include Dolphin, Opera Mini, Opera Mobile, and UC Browser.

The restriction on iOS is that third-party browsers must use an Apple-supplied version of the WebKit browser engine that’s more secure but slower than the version Safari uses. Windows Phone and Windows RT have related restrictions.

On personal computers, it’s completely ordinary to switch to other browsers depending on security, performance, features. In the mobile world, that’s not the case.

But the alternative browsers — especially when companies like Google put marketing muscle and brand equity behind them — could convince people that maybe they should venture farther afield. With Android spreading into more hands than iOS, it’s possible the openness of the PC industry could

Oh, one more thing — don’t be surprised to see a Mozilla browser on iOS, too.

Firefox OS makes a peep
Mozilla announced some early progress with Firefox OS in 2012 — though it failed to deliver it during the year as it had planned. Expect the browser-based operating system, which runs Web apps and is geared for budget smartphones, in early 2013.

Firefox is barred from iOS and Windows RT, and it is a rarity on Android. Without a presence in the mobile market, Mozilla can’t use its browser as leverage to pursue its goal of an open Internet. Firefox OS, geared for smartphones and running browser-based apps, is Mozilla’s answer. With it, Mozilla hopes to break the ecosystem lock that is settling people into the phone-OS-app store-cloud service silos from Apple, Google, Microsoft, and Amazon.

The first big Firefox OS partner is Telefonica, which plans to offer phones in Latin America with the operating system as a cheaper smartphones alternative.

“Mozilla’s prediction is that in 2013, the Web will emerge as a viable mobile platform and a third, alternative option to closed, proprietary walled gardens,” said Jay Sullivan, Mozilla’s vice president of products. Firefox and Firefox OS obviously are key parts of Mozilla’s effort to make that happen

Firefox OS won’t be an easy sell since inexpensive Android phones are common and iPhones continue to spread. But carriers can’t be happy ceding power to Google and Apple. And Mozilla doesn’t need to have 40 percent market share to claim victory: as long as its foothold is big enough to keep Web programmers from coding mobile sites only for the big boys.

Web standards divisiveness persists
Those hoping the end of a rift in Web standards governance most likely will have to keep on waiting.

The new frontier of emerging Web standards is populated by a hodge-podge of acronyms.

The World Wide Web Consortium long has played a central role in revising the standards out of which the Web is built, but a decade ago it chose to push a standard called XHTML that wasn’t compatible with HTML. The browser makers, it turned out, had veto power, and largely ignored XHTML in favor of advancing HTML on their own through a group called WHATWG. This split persists — and it’s not going away.

The W3C is enthusiastic about HTML and related Web standards such as CSS for formatting. But even as it’s ramped up its efforts, with plans to finish HTML5 standardization in 2014, the WHATWG has moved to a “living document” model that constantly updates HTML.

W3C CEO Jeff Jaffe has been trying to speed up Web standardization, with some success, and the W3C has remained relevant when it comes to CSS and some other work. But it has yet to fully regain its status with HTML itself, despite new members, new editors, and new energy. In fact, the cultural gulf in some ways appears to be widening. Even as the W3C’s formal committee machinations expand with new members, the WHATWG’s HTML editor, Ian Hickson, is moving the other direction. He said in a Google+ post:

Consensus (also known as “design by committee”) is a terrible way to design a language or platform. Committee design dilutes responsibility and blame (everyone just starts saying things like “yeah, I didn’t like it, but we had to do that to get consensus”) while letting everyone take credit for everything (since their ok is necessary to get consensus), which makes it an attractive proposition for people who want to further their careers without really doing any work…

You end up with a technology that doesn’t know what it is and doesn’t do anything well.

Web standards continue to evolve, but at least regarding HTML itself, it doesn’t look like either side will agree the other has the superior process.

High-res images on the Web
Apple’s Retina displays — the high-resolution screens used in iPhones, iPads, and MacBooks — enable a new level of crispness and clarity in images and text. Software makers have been gradually updating their programs with new icons, graphic elements, and abilities to take advantage of the displays. It’s been work, but not exactly a major re-engineering effort.

The W3C’s new HTML5 logo stands for more than just the HTML5 standard.

But Retina on the Web is a very different matter. First of all, nobody likes slow-loading pages, and Retina imagery has four times the pixels as conventional imagery. Worse, more of the Web is moving toward mobile devices that have an even harder time managing big images and whose data usage is pricey, and you especially don’t want mobile users downloading multiple versions of the same image when they don’t need to.

At the same time, mobile devices are often held closer to the eye than PCs but using physically smaller screens with higher pixel densities. That means old assumptions no longer are valid about how many pixels wide a graphic should be. The technology to fix this has the label “responsive images.”

Standards to the rescue! But uh-oh: Two camps each favor their own approach — one called the srcset attribute, the other known as the picture element.

Resolution probably will come in 2013, though.

There have been emotional differences of opinion, but Robin Berjon, one of the five new HTML editors at the W3C, sees discussions as fruitful now. He said in a blog post:

We have two proposals for responsive images, the srcset attribute and the picture element. Both have now reached the level of maturity at which they can be most usefully compared, and this discussion is about to go through a new chapter.

Browser makers and Web developers are actively moving to high-resolution graphics and videos on Retina-capable devices, so regardless of what happens in standards groups, the responsive images issue will be fixed. After all, high-resolution displays are increasingly common, mobile devices are increasingly important, and nobody likes looking at pixelated, mushy images when they don’t have to.

Web bloat
The good news is the Web is getting steadily more sophisticated, powerful, and useful. The bad news is there’s a price to pay for those advantages. Unfortunately for those who have capped data plans or who live in rural areas with subpar broadband, that increase in Web sophistication means Web pages get bigger and take longer to fetch.

The HTTP Archive’s records show a steady increase in the size of Web pages over the last two years.

There’s an old adage in the computing industry that the new horsepower that chips deliver is immediately squandered by new software features, so computers don’t actually appear to get faster. There’s a corollary in the Web world: As broadband spreads and speeds up, as faster LTE supplants 3G, so Web pages sponge up the extra network capacity.

The HTTP archive keeps tabs on the state of the Web, and it shows just how things are ballooning in its sample of tens of thousands of Web pages.

An optimist can find good news here, too. Google has an entire team devoted to making the Web faster, introducing new technology such as SPDY to speed up servers and browsers. Browser makers obsessively best new versions to try to catch any regressions that would slow things down. New standards make it easier for Web developers to time exactly how fast their pages actually load.

And don’t forget the bloat is there for a reason. Do you really want to dial the Web back to 1997?