UBS‘s Brent Thill today offers up his observations from having attended the Gartner conference on data centers in Las Vegas last week. 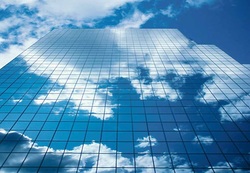 Based on that, he thinks VMware (VMW) and Microsoft (MSFT) stand to benefit the most, while “Salesforce.com (CRM), ServiceNow (NOW), Concur Technologies (CNQR), and Adobe Systems (ADBE) remain the strongest fundamental stories exposed to cloud apps,” he writes.

The benefits cited regarding cloud include higher agility, greater simplification of IT, and lower costs:

The instantaneous availability of engineering resources enables businesses to react to changing opportunities in a timely fashion. An online gaming company on the public cloud, for example, can easily scale up and down compute resources based on the number of visitors, bypassing a prolonged server procurement process […] The premise of cloud computing is the pooling of IT resources and managing them through a centralized management tool […] While upfront IT investment is lumpy for a private cloud, a mature private cloud can prove economical in the long-run.

Currently, public cloud services are still viewed as premature. They might not meet a certain service and availability level that some enterprises require. In addition, analytics on confidential data or mission-critical systems should not run on the public cloud due to compliance or strategic considerations. Having a private cloud in place is necessary to perform those functions and integrates analytics from the public cloud to present a full picture of the business and help companies make informed decisions.

He cites the example of Goldman Sachs, whose co-director for IT, Don Duet, spoke at the conference, saying that the bank only uses public cloud for testing app deployment, with its main operations inside the firewall due to sensitivity of data.

Goldman’s “four big bets” in IT are:

1. IT commodity products. Goldman tries to stay from heavy appliances and relies on web applications to scale things out.
2. Software-defined everything.
3. Driving infrastructure stack from application prospective (policy setting all the way to the data center level.)
4. Open source

In a conference attendee survey regarding primary x86 server virtualization vendors, 94% answered VMW (vSphere), 3% said MSFT (Hyper-V), 1% said CTXS (XenServer), 1% said RHT (RHEV), and 1% said ORCL (VM). VMW vSphere 5.5 has the best and the broadest feature set in server virtualization and MSFT is gradually closing the technology gap. We view server virtualization as a stepping stone to the private cloud. By leveraging their incumbent status, VMW and MSFT can land their customer base first in the private cloud business and expand to the public cloud whenever enterprises are ready. A hybrid cloud infrastructure also creates stickiness among SMB customers when businesses scale and a private cloud environment make sense. VMW has established itself as a clear leader in the management tool segment (see Table 2). In addition, through its acquisition of DynamicOps, VMW now offers a platform agnostic management tool which should help translate its dominance in server virtualization to the hybrid cloud business.

He measures the management tools by how many virtual machines they can handle. Here’s Thill’s table of how the vendors stack up (click for larger image):

Thill writes that the phenomena of “software-defined storage” and ”software-defined networking” are both of interest to IT types, but are perceived as being “still in early stages.”

Thill has Buy ratings on Microsoft and VMware stock, as well as CRM, CNQR, NOW, and ADBE stock.