Verizon has announced details about a new cloud computing service for business, Verizon Cloud, an IaaS offering the company claims will offer better end-user control over performance than any other cloud solution. 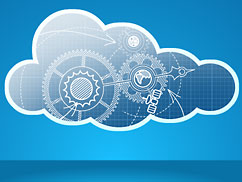 Much of the technology for creating this new cloud sprang from Terremark, the cloud technology company Verizon acquired in 2011. With conventional telecom on the wane, companies like Verizon are looking for related technology venues into which to expand, and cloud computing may well be one of them.

With Verizon Cloud Compute, Verizon says, “users can determine and set virtual machine and network performance, providing predictable performance for mission critical applications, even during peak times.” Other services, such as Amazon Web Services, force users to pick a preset virtual machine size. The other big selling point versus the competition is that Verizon Cloud will supposedly eliminate “latency issues that have plagued many traditional storage offerings” in the cloud.

Verizon Cloud is separate from Verizon’s existing Enterprise Cloud offering, a Terremark IaaS play that is essentially a VMWare-based cloud. By contrast, the technology behind Verizon Cloud is proprietary.

In an interview with InfoWorld, Verizon Terremark CTO John Considine outlined Verizon Cloud’s differentiation. To him, one of the biggest problems with cloud architectures has been how multitenancy has made it difficult to deliver consistent performance. Considine claimed Terremark has developed its own unique technology to deliver both the infrastructure and related services, built from the ground up.

“When we think about the cloud space,” Considine said, “we look at the generic cloud, where performance is what you get, and if your neighbor is doing stuff, you get impacted. Most of the time in the network and the storage spaces, you can’t get consistent performance. We’ve addressed all that fundamentally, so if you say, ‘Give me 100 megabits on this NIC,’ we will give you that performance on that network.”

When asked how this was done, Considine replied that the company had developed proprietary intellectual property. “We’ve moved to a fabric-based infrastructure, where all of the elements are placed on a high-bandwidth fabric, and we allocate performance by element and by user.”

Considine further revealed the system was built for performance first, with outward and backward compatibility to be expanded later on. For instance, right now Verizon Cloud only supports its own eCloud API, but in time CloudStack and AWS compatibility will be added.

While in beta, Verizon Cloud will limit access to “a few hundred new users per month,” presumably to gauge how the IaaS offering holds up under real-world usage. The hard part will not only be reliably delivering the services promised, but delivering them on a scale and scope that makes them worth choosing as an alternative to the likes of Amazon and others.

That said, some B2B customers have already been given early access. Among those in Verizon’s press release who are singing the praises of Verizon Cloud is Rob Walters of PaaS provider Engine Yard. Already, Walters says,”we’ve deployed some of our most demanding enterprise-grade applications on Verizon cloud infrastructure.”