Two-Thirds of the World’s Data Centers Going to Cloud: Cisco

Within four years, two-thirds of all data center traffic across the world — as well as workloads — will be cloud based. 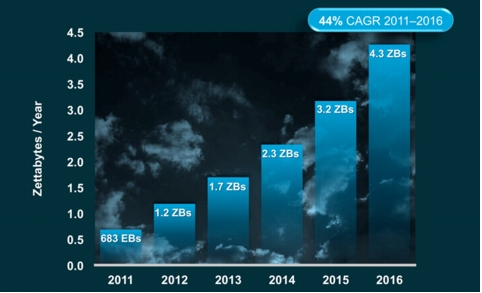 That’s the prediction of Cisco’s second annual Global Cloud Index, which forecasts global data center traffic to grow fourfold between 2011 and 2016, reaching a total  of 6.6 zettabytes annually. The company also predicts global cloud traffic, the fastest-growing component of data center traffic, to grow sixfold – a 44% combined annual growth rate (CAGR) – from 683 exabytes of annual traffic in 2011 to 4.3 zettabytes by 2016. That means that two-thirds of all data center traffic will be cloud-based, the report states.

Cisco’s predictions from last year about data centers and cloud traffic appear to be on track, then.

In its latest report Cisco points out that most Internet traffic has originated or terminated in a data center since 2008. “Data center traffic will continue to dominate Internet traffic for the foreseeable future, but the nature of data center traffic is undergoing a fundamental transformation brought about by cloud applications, services, and infrastructure,” the report states. Cisco doesn’t distinguish between private and public cloud in its measurements.

The move to cloud means a different type of economics is emerging, the report explains. “With increasing server computing capacity and virtualization, multiple workloads per physical server are common in cloud architectures. Cloud economics, including server cost, resiliency, scalability, and product lifespan, are promoting migration of workloads across servers, both inside the data center and across data centers (even centers in different geographic areas).”

Often an end-user application can be supported by several workloads distributed across servers. This can generate multiple streams of traffic within and between data centers, in addition to traffic to and from the end user. The average workload per cloud server will grow from a little over four in 2011 to eight and a half by 2016. In comparison, the average workload per traditional data center server will grow from one and a half in 2011 to two in 2016.

The Cisco Global Cloud Index was developed to estimate global data center and cloud-based Internet Protocol (IP) traffic growth and trends. Its conclusions are derived from modeling and analysis of various primary and secondary sources, including 40 terabytes of traffic data sampled from a variety of global data centers over the past year; results from more than 90 million network tests over the past two years; and third-party market research reports.