Aiming to have user accounts show up more often in various search engines, the social network develops a directory tool.

Twitter has made it easier to find its millions of users on search engines by launching a new “Profiles Directory” tool. The directory lists all user accounts alphabetically and includes profiles with numbers and non-Latin character names.

Twitter did not formally announce its new directory but instead quietly debuted the feature on the bottom of its homepage. “We launched this a few weeks ago,” a Twitter spokesperson told CNET, “to help people find the accounts they’re looking for with various search engines.” 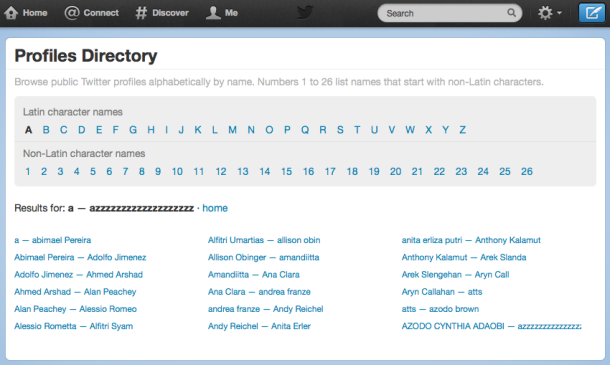 The tool was most likely created to get Twitter into more searches on Google, Bing, Yahoo, and other engines — rather than be particularly useful to the social network’s users, according to Search Engine Land. The tool should be helpful in attracting advertisers because more search engine traffic usually means more page views, which is something advertisers look for in clients.

Facebook also has a profile directory, which looks almost identical to Twitter’s new tool. Google Plus has account listings too, according to the Labnol blog, but user information is less accessible because it’s within thousands of XML files.