The next revolution in cloud computing

Supercomputers have gotten increasingly powerful, putting a premium on the software needed to run them. FORTUNE — Remember the Titan? No, not the comeback football team. The supercomputer that generated headlines last November for ranking as the world’s fastest. Titan can crunch so many calculations, it has the equivalent processing power of 500,000 laptops. 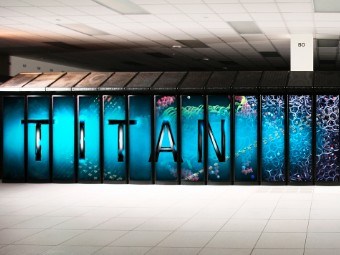 All that computing might is for naught without software capable of managing it. Software is a major—if often unsung—factor in the future of high-power computing. It will matter increasingly to businesses of all kinds as more and more products and services move into the cloud. “The line between high performance computing and cloud is blurring,” says Rob Clyde, CEO of Adaptive Computing, a company that builds software to increase efficiency in supercomputers and cloud-based servers. Today, Adaptive revealed it developed the software that boosted Titan’s efficiency from 70% to about 95%. The software used to make Titan tick is similar, Clyde says, to software that optimizes the cloud.

That matters because as computing power gets more and more robust, the biggest challenge will switch from increasing raw processing brawn to optimizing the systems that we have. “We’re moving to a world where computing is almost sort of indistinguishable from being infinite,” says Aaron Levie, CEO of cloud storage company Box. “The tools to manage that computing are becoming the next limiter.” Box, Levie says, devotes dozens of employees who spend their days thinking about that single problem.

Such software should help companies deliver better services to consumers. For example, says Clyde, take a company that offers a speech-recognition service powered by programs in the cloud. If the company supports the service with software that efficiently prioritizes tasks, the service will find words faster. Consumers love speed.

MORE: The Japanese app that is storming the world

This remote-seeming software has another big benefit: It will boost the accessibility of massive computing power in the cloud. “Thirty or forty years ago, you had to basically build out a mainframe to run complex computations,” Levie says. Those mainframes cost tens of millions of dollars. “Today, you can just run it in a virtual job in somebody else’s cloud. You literally only pay for the amount of computing you use in a very discrete time period.” Even better software, better cloud management, will let more and more people use its computational power.

That will give companies the power to innovate around discoveries made from running involved programs without bankrupting them in the process. That should, in turn, enable companies to deliver better services. That is, of course, until the computers render us useless.