The Future Of The Personal Computer Is In The Cloud

The predictions that the PC is about the go the way of the dinosaur (or the pager, or the fax machine) have largely come from the financial sector and rabid Apple fans. Both of these groups have seen declining computer sales, especially the recent 14% drop, as proof of their theories. 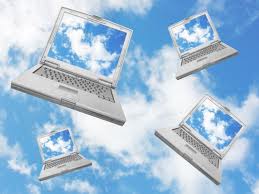 Microsoft’s huge recent faux pas, Windows 8, is just further proof that personal computers will be crowding the landfills and we will all face the sunset, singing “Kumbaya”, reading the lyrics from the screens of our iPads and iPhones.

How many of these reports were written on a touch screen, and how many were composed on the more familiar personal computer configuration of screen and keyboard?

Touch screen mobile technology may indeed prove to be the most common computing experience, but for the foreseeable future, it simply has not, and likely will not, taken the place of the keyboard and screen interface, especially in the work place.

Users who have access to both tablets and full sized computers find that the two technologies are complimentary rather than competing. Tablets and touchscreen technology are gaining more usefulness in the workplace on a daily basis. Text and email are becoming as accepted as voice for business communication, but many people, especially those sending professional emails, are loath to compose on a touch screen. University of Pennsylvania professor Amy Sepinwall finds “any extensive email writing, word processing or power point work on my iPad, and find even web surfing easier on my PC than on a tablet.”

Mobile technology is closely tied to Cloud computing, and as Cloud applications improve, the traditional roles of the keyboard and screen personal computer may transition to mobile. Google, who is working hard to stake a claim in the Cloud game, also realizes that Cloud applications, whether mobile or PC based, require ever faster broadband connections.

The need for faster broadband is the impetus for Google’s recent forays into city wide fiber-optic networks. In April, Google announced that it would expand fiber-optic service to Austin, Texas. Last year the search giant began providing high-speed Internet service to Kansas City. Although every Internet and Cloud application will benefit from the higher speeds, Google’s emphasis seems to be on Chromebooks.

The Cloud As OS

Google Chromebook computers are personal computers in the sense that they are a keyboard and screen interface, but the laptops, manufactured by Samsung, Acer and Google are loaded with the Chrome OS, which is not so much an Operating System as it is a glorified web browser. The Chromebook is designed to run more on Cloud applications than with software actually loaded onto the computer itself.

Will the Personal Computer go the way of the dinosaur? Very likely, but even standing on a pile of iPads, we cannot see that day on the horizon.