Home Startup Asia audience selects winner in Bitcoin debate
DT, May 9, 2014May 9, 2014, Emerging Technology, IT Strategy, Technology, User Experience (UX), Bitcoin debate, Emerging Technology, IT Strategy, Singapore, Startup Asia audience, Startup Asia Singapor, technology, User Experience, 0
Startup Asia welcomed Richard Jerram, chief economist from the Bank of Singapore, and Aurelian Menant, the co-founder and CEO of Gatecoin, a Hong Kong-based digital currencies financial institution, to the stage to kick off the afternoon sessions with a debate about the future of Bitcoin in Asia.
Moderated by Tech in Asia’s own Terence Lee and Gwendolyn Regina Tan, the debate focused on the essential purpose and viability of Bitcoin, how government regulation will impact it, and its potential for mass adoption. As Jerram started his opening argument, he dryly noted that his participation in the event was like being “a vegetarian at a hot-dog eating competition”. He posited that the main issue is that Bitcoin is too difficult to define. 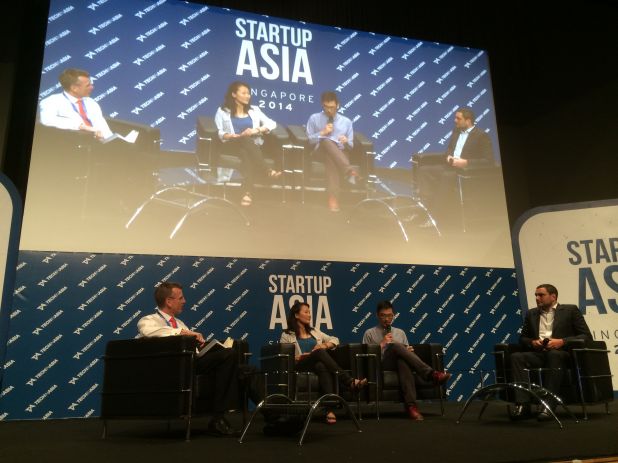 He acknowledged that many are buying Bitcoins as an investment but then noted that Bitcoin’s lack of cash flow means it cannot properly be defined as an investment. In Jerram’s estimation, Bitcoin is little more than a ponzi scheme and calling it a novelty would be charitable at best. Menant countered by pointing out that plenty of people invest in currencies which are also not related to cash flow.
He also said that when currencies are first introduced, they are often used as a means of speculation prior to gaining real traction as a societal tool. Menant further disputed the ponzi scheme charge by noting that the essence of Bitcoin is that it is a decentralized system whereas a ponzi scheme is a centrally organized fraud scheme. Regarding the role of government regulation on the future of Bitcoin, Menant had a sunny outlook. He cited the trend of several nations, France and Germany among them, debating how best to regulate it.
This shows, he argued, that nations have decided that Bitcoin has taken root and, in order to protect their own citizens, they will develop the appropriate regulations to ensure a Mt. Gox-type event does not occur again. Jerram was less optimistic. He observed that the existence of a government is partially rooted in its ability to provide a strong, stable currency.
If Bitcoin became a threat for being a primary currency, a government would have a strong incentive to eliminate it. The debate then boiled down to the essential question of: Can Bitcoin become mainstream? Can it replace the dollar? Jerram saw this as an unlikely outcome. He is not yet convinced as to how it adds value for consumers. He explained that, as an advisor for wealth management, he could not recommend bitcoin investment to his customers because he is not yet convinced of the product’s real value.
While Jerram conceded that Bitcoin could be beneficial for transaction purposes, he noted that Bitcoin is not being sold as a transaction solution technology. Instead, it is regularly portrayed as a potential investment which has resulted in a media-powered buying spree which will ultimately be unsustainable. (See: This startup is bringing SMS Bitcoin wallets to Singapore and beyond) In response, Menant emphasized Bitcoin’s potential for disrupting industries besides banking.
He gave the example of using Bitcoin, with its ability to prevent fraud via verified accounts, to simplify the process of contract signing. In closing, he reminded the audience that 20 years ago, the internet was described in similar terms as an untrustworthy product favored by the fringes of society. Mainstream adoption of new technology can simply be a matter of time he advised. After the debate, the audience at Startup Asia Singapore was asked to vote for which argument was more compelling. After tallying the final results, Richard Jerram was declared the victor.
Share this
0 likes
Related Articles
0 Comments