Singapore is hoping that building expertise in high-tech niches such as 3D printing and robotics will let it sustain a large manufacturing sector despite the exit of many labour-intensive industries to cheaper bases elsewhere in Asia.

In line with government efforts to lift productivity and cut reliance on foreign workers – whose big numbers have made citizens unhappy – Singapore’s Economic Development Board (EDB) no longer courts multinational companies that want to employ many low-cost employees.

But it keenly wants to pull in more companies for cutting-edge production. 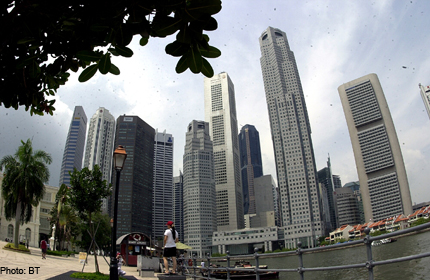 “The future of manufacturing for us is about disruptive technologies, areas like 3D printing, automation and robotics,” EDB Managing Director Yeoh Keat Chuan told Reuters.

The economic planning agency is hoping more firms will follow Rolls-Royce and Procter & Gamble to take advantage of new technologies it’s trying to promote, as well as Singapore’s low tax rates and other incentives.

Last week, P&G opened a S$250 million (119 million pounds) research centre in the city-state and has signed an agreement with Singapore’s science and technology agency giving it access to Singapore’s universities and hospital research facilities.

Rolls Royce signed a S$75 million deal with one university last year to do research into computational engineering and other areas.

The EDB, which has helped drive the island’s transformation from a trading outpost to an economic powerhouse, lured technology companies in the late 1960s and 1970s with incentives and low-cost labour.

Operations to assemble televisions and components have gone to Asian countries with much lower wages. However, manufacturing still accounts for about 20 percent of Singapore’s gross domestic product, and the government wants the level to remain 20 to 25 percent. In rival financial centre Hong Kong, manufacturing makes up about 2 percent of the economy.

Singapore is focused on developing a regional manufacturing supply chain, where companies can base labour-intensive work in nearby countries, while engineering and design work is done at home.

And it hosts sophisticated manufacturing. About one-third of the world’s hearing aids are made in Singapore, many by German engineering conglomerate Siemens AG.

But for manufacturing in general, “it’s not possible for us to do everything in Singapore,” said Yeoh. “Activities which are much more labour intensive and can’t be sustained in Singapore will need to move out.”

He is hoping higher-paid work in sectors such as 3D printing and biologics – making drugs from proteins in cell cultures rather than synthetically – can expand.

In the service sector, Singapore wants to develop technologies for e-commerce and big data.

The city-state has a target of 2,500 data analytics professionals by 2017. Already, about half of Southeast Asia’s data centre capacity is in Singapore.

“That’s not because we have low-cost energy, we don’t, or because our weather is cool, it’s not, but because companies feel very confident about the security of the data residing in Singapore,” said Yeoh, who has led the EDB since 2012.

Singapore’s shipyards industry is one that may have to shrink as part of the government’s productivity drive. While it currently employs 120,000 of the city-state’s 5.3 million people, the number of foreign workers versus local is 5-to-1, a ratio the government wants at 3.5-to-1 by 2018.

One set of foreigners the government is keen to maintain are top-level executives, as it tries to get more multinationals to set up regional or international headquarters.

Last year, the city-state received a boost when General Motors said it would shift a unit that oversees much of its international operations to Singapore from Shanghai, a decade after the company left the island.

Singapore’s low taxes and high living standards make it a popular choice. A study by the Frontier strategy group in 2010 found 44 percent of global companies’ Asian headquarters were in Singapore, compared to 17 percent in Hong Kong and 13 percent in Shanghai.

BASF and IBM are among corporates that have moved global units, led by key executives, to Singapore.

“These are top calibre leaders – the question for us is whether we can see Singaporeans eventually taking on these positions,” said Yeoh.