Today, the agency has garnered huge followings on the key social media channels, putting them among the top five government social media sites in the country. 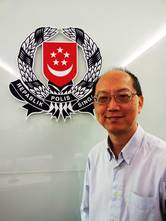 “We are pleased with the high engagement we are seeing on these channels. Our Facebook posts usually receive over 100 likes each. The videos on our YouTube page are also very popular with the people, it currently has more than 5 million views,” says Fong.

The agency leverages social media to appeal for information on suspects of unsolved crimes. By posting images of the suspect captured on surveillance camera and giving brief information on the incident, members of the public have come forward to assist with the investigation.

“We achieved our first ‘Facebook arrest’ in November 2011. Since then, we have solved at least 10 cases thanks to tip-offs from members of the public responding to our appeals through the use of social media,” he adds.

Benefits of social media
As early as 1980s, the force has adopted the community policing system. Citizens are involved as eyes and ears on the ground to fight crime alongside the Police.

“SPF has a strong community involvement focus. We have been doing that through face-to-face engagement and regular dialogues with local stakeholders such as schools, resident zone committees, hawker associations, etc. We update the community on crime trends and educate them on crime prevention tips,” describes Fong.

With the rise of social media and the changing media consumption habits, SPF has decided to move with the times and establish a presence on social media. “Being active online helps us to maintain or even increase our reach,” he says.

The agency appreciates the additional options that social media provides to reach out to the community.

“Social media allows real-time interaction with our online community,” Fong continues. “With our presence on Facebook, Twitter and YouTube, we can push out our messages whenever needed to reach out to citizens and receive feedback almost instantaneously.”

Moreover, the online network acts as a round-the-clock engagement platform that complements the traditional face-to-face activities. “When officers visit residents knocking door-to-door or cycling around the housing estates, they may not get to meet all residents as some might not be home. Or they could be too busy to participate in outreach activities organised by Police. So social media helps get the message out to more people.”

Finally, the positive public feedback received through Police’s social media channels has also helped boost the officers’ morale. SPF updates the community of solved crimes from time to time, such posts tend to attract encouraging and positive comments from followers.

“Officers work very hard to crack a case, sometimes that means not sleeping for up to 48 hours to chase down leads before they turn cold. Positive comments like “thank you for keeping us safe” or a simple “great work” helps to motivate our officers and make them feel that their hard work is appreciated,” explains Fong.

In the second part of this interview, Fong will reveal the challenges of navigating the new social media environment and how the Public Affairs team has adapted new styles and strategies for success.

“There has been some degree of media fragmentation as people use multiple channels to get information and news,” says Fong. “This has made the objective of reaching our target audience more challenging.”

On the other hand, the media sector has witnessed a convergence of media. Traditional media organisations have adopted an online presence through web sites, social networking platforms and mobile apps. As a result, information gets disseminated quickly, across print, social media and mobile web. Speed is critical in this new media environment. “There may be times that inaccurate statements get circulated online. The challenge is to correct any misperception quickly.

The Public Affairs team has to check with the ground units immediately and provide the public with the facts as long as it doesn’t hamper ongoing investigations,” he adds. New style, new skills The use of social media is largely managed by the Public Affairs Department in collaboration with other departments and with strong support from the senior management and on the ministry level. Within the Public Affairs Department, the agency has four officers dedicated to new media engagement. “We saw the need for dedicated specialised personnel due to the growing level of engagement through these channels.

We are now called ‘Public Communications’ officers to reflect the type of direct engagement we have with citizens today,” he says. Fong describes how the role of Public Affairs officers has evolved with the rise of social media. Traditionally, officers drafted press releases for journalists who then re-packaged and published the content for the wider public.

You need to adapt the message and tone, make it bite-size and attention-grabbing,” he explains. “You should have an engaging photo or a message that connects emotionally with the audience, otherwise you won’t stop people in their tracks as they swiftly scroll through newsfeeds, especially on their smartphones.” Communications officers today need to adopt a different mindset and communications approach. Fong cites a more recent example of the launch of SPF’s revamped Neighbourhood Police Post. Besides posting the usual formal photos about the official proceedings, SPF took a different angle and included candid shots which successfully caught the attention of its social media followers.

“Kindergarten students, who were invited to be part of the launch, were dressed in mini police uniforms. Photos of these cute ‘Junior Police Officers’ were so popular that they generated more than 1500 likes on Facebook.”

We are now looking at how we can improve the quality of engagement, for example, by humanizing the Police Force through heart-warming stories, meeting our fans face-to-face when they visit Police units, and alerting our online community of important breaking news as they happen.

Fong and his team are still finding ways to accurately measure their social media engagement rates. “Our social networks are doing well quantitatively, with a good number of followers, shares, likes, retweets, etc. For quality of engagement, we are looking at Facebook Engagement Rate, ‘People Talking About This’ and other metrics,” he shares.

“We believe that if we deliver on interactive engagement, the fan numbers will naturally follow. Ultimately, we want to use social media to build a vibrant online community and galvanize them into working with Police to keep our neighbourhoods even safer,” he concludes.