Singapore Plows Ahead of U.S. With Technology in Classrooms

Forty students in bright yellow shirts hunched over their computers in Singapore’s Crescent Girls School as they raced against their teacher’s digital stopwatch. They had just a few minutes to add their thoughts about a short film on discrimination into a shared Google Doc and browse the opinions of their classmates.

When the time was up, their teacher led a discussion about the meaning of discrimination and how to judge the credibility of an argument. The computers sat mostly forgotten. 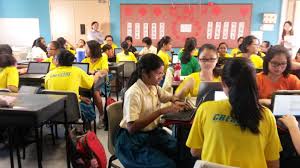 “The technology just fades away, and that’s what we hope for it to do,” said Principal Ng Chen Kee.

Crescent Girls School has plenty of flashy gadgets, but balances those with these more subtle exercises in a way that’s emblematic of how Singapore tries to approach education technology.

Glitzy tech that serves no purpose other than being cool is frowned upon. In classrooms in Singapore, digital devices are increasingly viewed as a means to bring students together in collaboration, rather than separate them further.

In contrast, American students who have tools like tablets and computers in the classroom often use them in isolation, powering through interactive worksheets and online quizzes. Indeed, technology’s main purpose often seems to be giving students personalized learning paths and a way to progress at their own pace.

In part, it’s because online learning in America grew out of a push to move away from rigid requirements of the number of hours a student should spend on a subject in favor of allowing them to move on once a concept is mastered.

“That’s where the conversation started within the U.S.,” said Allison Powell, a vice president at the International Association for K-12 Online Learning (iNacol). “In a lot of other places, it wasn’t about taking an individual online course. It was ‘Let’s integrate it into the classroom.’”

Singapore has been one of the highest performing countries on international assessments for decades, while the United States remains stuck below the top performers. Investments in education technology have been a key part of Singapore’s national plan for two decades and have been cited by some experts as a reason that the country has so much academic success.

Singapore, South Korea and Uruguay were praised by Richard Culatta, director of the United States Department of Education office of educational technology, as global leaders in technology in the classroom.

“These are impressive places and they didn’t get there because they randomly decided to do it. These are countries that have not taken their eye off the ball,” he said. “There’s a point where if we’re going to remain competitive globally, we need to make sure we’re keeping up.”

In the late 1990s, the Singapore Ministry of Education unveiled its master plan for technology. The first phase was spent building up infrastructure and getting computers into schools. In the 2000s, in phases two and three, the ministry focused on training teachers in how to use gadgets and identifying schools to experiment with new innovations.

Crescent Girls School was selected in 2008 to be one of eight so-called FutureSchools. With extra money from the ministry and support from the National Institute of Education (NIE), Singapore’s teacher training university, these eight schools have been chosen to develop and trial new types of technology. If they work, the plan is to spread them to other schools.

History teachers at Hwa Chong Institution are working to create new social media platforms for students to share reflections. Students at Canberra Primary School visit a 4D immersive lab in groups to learn about different environments, like the rainforest. Crescent Girls has developed the “digital trails” platform, where students and teachers make interactive maps by adding text, photos and videos.

The school also has a room full of touch-screen tables, loaded with games and applications to prompt discussion and teamwork. In one, four students, each with a different responsibility, must use geometry concepts to protect a submarine from enemies.

Beyond the FutureSchools, the Ministry is also bankrolling other tech endeavors for schools. Researcher Kenneth Lim has set up a lab at the NIE where he’ll design custom virtual environments for any lesson teachers want, such as a lesson on perspective in an art class or one on water shortages in geography.

OK to experiment and make mistakes

The worlds are designed to be incomplete and act as a virtual workbook, where students can try to fill in the blanks. They wander around with their avatars, talking to classmates in person and online. “Their whole threat level is lowered,” Lim said. “They make mistakes.”

Singapore is trying to move beyond the much-criticized culture of high-pressure testing and studying by memorization here and in many other Asian countries. That’s why officials are focusing on soft skills, like collaboration and confidence.

Technology, like Lim’s work, is becoming a popular way to allow students to learn by exploring without worrying about the consequences of failure.

On a January morning, Lim and his team helped eighth graders in a Design and Technology class at Marsiling Secondary School enter their virtual world for the first time and practice drawing basic shapes. The end goal was to create a gallery that would allow students to comment and help each other on their work.

It’s the first major technological project the school has undertaken, and as Principal Foong Lai Leong stood in the corner watching, she was trying to think of other courses that might benefit from some digital lessons. Science and art, definitely, she decided. Maybe even certain topics in math.

There’s no pressure from the Ministry of Education to use technology for any particular subject or in any way. It is encouraged, but always with a reminder to “be wise, be judicious,” said Ng Pak Tee, an associate dean at the NIE. “It should not be a teacher looking at a technology saying, ‘Wow.’”

This careful and deliberate introduction of digital devices into the classroom sets Singapore apart from many places in America. While some districts or schools have rolled out programs thoughtfully, they’re still the minority, Powell said. “I get calls from superintendents and principals on a daily basis [saying], ‘I went out and bought 500 iPads. Now what do I do?”