School trials cloud-computing for use with tablet

To encourage schools to make the most efficient use of government-issued computer tablets as learning tools, the Information and Communications Technology Ministry and the Education Ministry have joined with Openface Internet to launch a pilot project of the Braincloud System at Satainrattanaram School in Nakhon Pathom province. 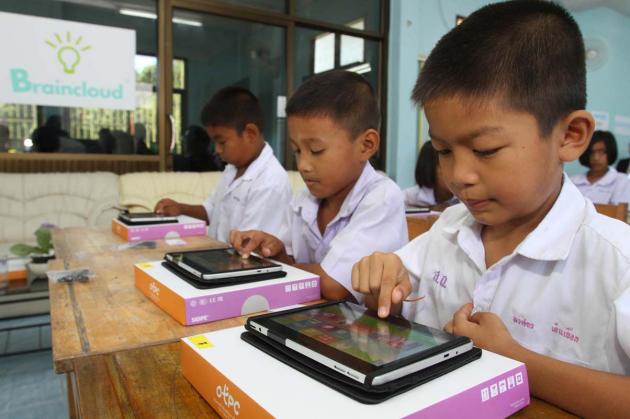 The government has issued the devices to students under its One Tablet Per Child (OTPC) scheme.

The concept of the Braincloud System is to connect schools via the tablets to allow students and teachers to access learning materials and courseware as well as educational resources, including teachers in Bangkok.

Tan Soamboonsrup, president and co-chief executive officer of Openface Internet, an Internet infrastructure and software solutions provider based in Montreal, said that since 1996 the company and its partners had invested Bt10 million to Bt12 million to set up the Braincloud System and Internet connections using virtual fibre technology.

The system has been set up for six schools in Nakhon Pathom province. The plan is to connect these schools, which have received tablets for use by Prathom 1 students, to the Internet at a high speed of 100 megabits per second, via both upload and download.

The company has established stations it calls “Brain Towers” at the schools. The tower will receive an Internet connection from TOT’s network and then facilitate connections in the form of a Wi-Fi signal to allow tablets in the schools to connect to the Internet wirelessly.

“We built one tower for each school. They use virtual-fibre technology that allow users to stay connected to the Internet at 100Mbps upload/download within a 10-kilometre radius,” Tan said.

Aside from the towers, the company developed and set up Braincloud System servers to store courseware and to act as a learning management system to allow teachers to access courseware developed by the Education Ministry.

He said that as part of the company’s corporate social responsibility programme, the service would be offered free to the six schools during a five-month trial period from now through the end of March.

ICT Minister Anudith Nakornthap said this project was part of the government’s smart-network scheme to connect all schools in Thailand via high-speed Internet, while also supporting the government’s OTPC scheme.

Currently, 9,600 schools throughout the country have high-speed Internet connections under the National Education Network (NEdnet). There are 22,000 schools nationwide connected to the Internet at lower speeds.

The government plans to spend Bt22 billion to put high-speed Internet connections in these 22,000 schools. It aims to connect 80 per cent of them by next May.

“We are looking for the best technologies and solutions to connect all of the 22,000 schools at the appropriate speed for learning with tablets and online courseware,” Anudith said.

“The 22,000 schools are not the only group included in the plan to provide ‘last mile’ high-speed Internet connections. We have allocated Bt30 billion for the 22,000 schools, [as well as] 14,000 hospitals, and 8,000-9,000 local administrations throughout the country to establish ‘last mile’ connections,” the minister said.

“Last mile” is a term used by Internet providers to refer to the final leg of a telecommunications network – the section that actually reaches the user.