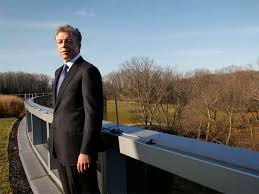 SAP’s revenue from cloud computing – where companies use software based at servers instead of at their own offices – more than tripled in the third quarter, to 191 million euros ($261 million) from 63 million euros a year earlier. The business is smaller than SAP’s older business installing and servicing software at companies. But the cloud part of the business is showing much faster growth.

“We said we’d be the cloud company,” Bill McDermott told the Associated Press on Monday, emphasizing the word “the.” ”We are the fastest growing cloud story in the enterprise software world.”

SAP AG, headquartered in Walldorf, Germany, said net profit rose 23 percent to 762 million euros as revenue rose 2 percent to 4.045 billion euros. Net profit grew faster than top-line revenues in part because the company held down costs by restraining new hires. It had 66,061 fulltime workers at the end of the quarter, up only 380 from a year ago once businesses the company has acquired were discounted.

The company’s shares rose 5.3 percent to 56.32 euros in late afternoon trading in Europe.

Revenue from the company’s older, on-site software business slipped 5 percent to 975 million euros – but grew 2 percent when excluding the impact of exchange rate shifts. The company stayed with its forecast for sales and profit for the full year.

“The euro is unbelievably strong and there’s nothing operationally that we could do about that,” McDermott said.