CEO of US video streaming company Netflix, Reed Hastings, says that the current state of cloud computing is akin to the era before compilers took some of the heavy lifting away from coding.

Netflix started its move to Amazon’s cloud in late 2009, and according to Hastings, who addressed the recent AWS re:Invent customer conference in Las Vegas, 95 percent of the company’s computation and storage is provided by Amazon Web Services. 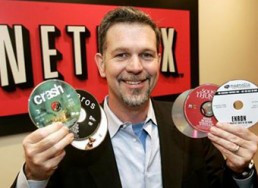 “We’ve got some remaining low value systems that we haven’t yet converted but we hope by the end of next year to be the largest business in the world that’s 100 percent on AWS outside Amazon retail,” Hastings said.

Hastings said that Netflix was ahead of its time when it started to shift to the cloud, but it had little choice due to extraordinary growth. “So streaming at that time in 2008 was about a million hours a month and now it’s about a billion hours a month,” Hastings said. “So we’ve had this thousandfold ramp up in computational resources necessary over just four years … and so we had to take some risks.

“And doing that kind of buildup of your own data centers was going to be challenging. And it’s worked out great for us.” The agility of cloud computing and the cost curve, with AWS dropping prices as more customers move to the cloud, had both worked in Netflix’s favour.

However, Hastings added that cloud computing was still in its early days, likening it to programming in assembler.

“As fundamentally fantastic as AWS is, we’re really still in the first, very primitive, first assembly language kind of phase of cloud computing. And when you have to pick individual instance types—m1, m2, m3—you know something’s wrong, right,” Hastings said. “You as a developer shouldn’t have to be picking the individual instance types. And it reminds me a lot [of] when I first started in computing and register allocation was the big deal and how you allocated register made a huge difference in performance; and when you loaded and unloaded them.”

“And then this magical thing compilers came along and the compilers did an awfully good job at register allocation and then only on occasion would you have to drop into assembly code and do your own register allocation,” he said. “So we’re kind of at that stage before the compiler and over next five or ten years things will happen to make cloud computing much easier, when you don’t have to do things like pick instance types.”

Hastings said he was anticipating the ability to move running live instances, which will be “the next stage of virtualization for all the cloud providers,” letting providers find the best type of instance for a customer’s cost profile.