If you’re having a tough time figuring out the Microsoft Cloud OS, you’re not alone. Why else would the company put up a blog post titled “What is the Cloud OS?” the same day it rolls out a host of major upgrades to System Center 2012 and InTune in support of its cloud platform? Microsoft’s basic vision for Cloud OS is for it to function like a desktop or server OS charged with managing hardware and applications — at cloud scale. The company’s dream here is for IT to have a single pane of glass for monitoring and provisioning all the resources running in the company’s private cloud, as well as in partners’ clouds and especially Microsoft’s public cloud, Windows Azure. 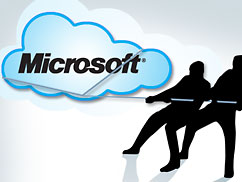 For example, an IT admin could flip a couple of switches to transfer a workload from in-house servers to a service provider or to Azure, whether for lack of available hardware on-site, to save money because the service provider can do it more cheaply, or because said IT admin is too short-handed to manage that load himself.

All of that would be completely invisible to end-users, who could go about their workdays, securely accessing apps and data from their device of choice from wherever they happen to have an Internet connection.

This broad vision rests on the combination of Windows Server 2012, Windows Azure, and the linchpin between them, System Center 2012. Available now, Service Pack 1 for System Center 2012 gives companies a means of managing data center components (networking, storage, and compute) as whole, rather than in a piecemeal fashion. The goal is to enable such capabilities as multitenancy, network virtualization, and storage virtualization for automated, hybrid cloud environments.

“With SP1, a single instance of Virtual Machine Manager now supports up to 8,000 VMs on clusters of up to 64 hosts, and customers can easily extend beyond these limits with multiple instances of VMM, enabling data center management at large scale,” according to Schutz.

Microsoft also announced it has unified Windows Intune cloud-based service and System Center Configuration Manager as a single management solution for PCs and mobile devices. The marriage aims to provide the tools for securing and managing Windows-based clients (from Windows 8 PCs, Windows RT tablets, and Windows smartphones), as well as devices running Android and iOS.

With Intune, IT admins will now be able “to manage both corporate- and personally owned devices with a single console, making it easier to identify and enforce compliance. Users can also access a self-service portal for selecting and installing company apps,” according to Schutz.

Microsoft is intent on wooing the service-provider market to help build out that broad, interconnecting Cloud OS cluster. To that end, the company announced Windows Azure technologies that providers can run on their own Windows Server 2012 infrastructure “for high-scale website and virtual machine hosting services,” according to the company.

Among Microsoft’s other Cloud OS announcements: