Powering Up the Cloud

A new product from one of Silicon Valley’s legendary engineers also says a lot about where the industry is going. On Wednesday, Arista Networks, a maker of very fast computer networking equipment, announced a data switch that can move outputs of 10 gigabits per second as well as ones that are four and 10 times that speed. At the fast end, that is more than enough to transmit two high-definition movies a second, from each of 96 ports, or data outlets, on a single switch. 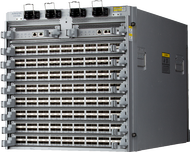 A few years ago, 1 gigabit per second was considered lightning-fast. The switch can also manage 100,000 computer servers at once in concert with other Arista products, compared with about 6,000 servers on a typical switch now. Information moves through the switch in less than five nanoseconds.

If successful, the product could enable much bigger and more efficient cloud computing centers than exist today. “This changes what people can do in a data center,” said Andreas Bechtolsheim, Arista’s co-founder and chief development officer. “It’s a threefold improvement in power efficiency, and three times the performance. In this industry you don’t get threefold improvement: People are excited when Intel increases from eight cores to 10 on a chip.”

Mr. Bechtolsheim is a co-founder of Sun Microsystems, and the first major investor in Google. His co-founders at Arista include David Cheriton, a Stanford Computer Science professor who founded two other companies with Mr. Bechtolsheim, and has long dreamed of building a very-large-scale operating system for cloud computing. The company’s chief executive, Jayshree Ullal, was in charge of the data center and switching business at Cisco Systems.

Arista plans to sell the product, called 7500E (where do they get these terrific names?) for less than prevailing market prices. One hundred gigabit equipment can cost $100,000 per port, once extras are counted in. The Arista product is expected to cost about a tenth that, Ms. Ullal said. The founders of Arista consciously chose to build their machines with standard industry semiconductors, rather than the custom chips that Cisco historically uses to make fast switches.

Most of its initial customers probably will not be motivated by price. Arista has been popular with high-speed financial traders, large cloud-computing companies and big data supercomputing businesses. In most of these fields, speed matters more than cost. While there are few companies like these, they tend to buy in bulk.

Longer term, however, the switch could attract more companies to get into building clouds. It could also make Arista an important part of the move to software-defined networking, or S.D.N., which is expected to make even bigger and more powerful computing clouds, because it will automate many processes that now must be done manually. And the pricing, along with the move to S.D.N., may make life difficult for Cisco, which now dominates the high-end market, but does not have an S.D.N. product.

“This makes us a viable alternative to Cisco,” Ms. Ullal said. But for over a year, Cisco has been working on a secret project to get into S.D.N., headed by Mario Mazzola, at one time Ms. Ullal’s boss.

Cisco would not comment on the Arista product, as it had not yet examined the switch. But Colin Kincaid, vice president of product management at Cisco, said: “Mario is watching Arista very closely.”

Mark Fabbi, an analyst with Gartner, called the Arista product “a couple of different plays against Cisco.” He explained, “There is not just the 100 gigabit, there is the seamless transition with other speeds, so there is a lot more flexibility.” If such a product were made by Cisco or another large vendor, he said, “you’d expect them to have a premium price, not come down.”

Mr. Fabbi noted that Cisco, in addition to making hardware, was moving more into selling services, and helping companies with technology decision-making.

“Cisco is trying to move across several businesses, while Arista is doing pure technology,” he said. “These two could end up coexisting.”