After its launch in November, Singapore-based peer-to-peer (P2P) mobile commerce platform Duriana today announced that it has surpassed 110,000 listings, with 80 per cent of them originating from Malaysia. The free app is available on iOS and Android devices. 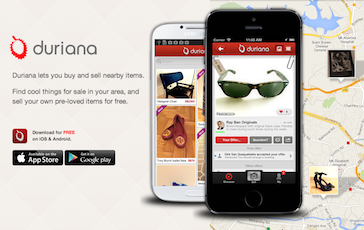 The location-centric marketplace allows users to list ‘pre-loved’ and new items from various categories, such as fashion and electronics, and contact other sellers or buyers through its in-app features. Camilo Paredes, Co-founder, Duriana, said, “… As social commerce continues to grow in Malaysia, these young entrepreneurs have eagerly adopted our app as their main way of selling and reaching new customers.”

Amanda Ernst, Co-founder, Duriana added that smartphone penetration has been strong in both markets, Singapore and Malaysia, which has led to increased interest in mobile commerce.

She added, “We see contrast in that there is more established online selling in Singapore, which translates to more opportunity for m-commerce. In Malaysia, people are still very offline and have been entering the online selling world more through social commerce. Receptiveness for our app from Malaysians has been fantastic. They have eagerly adopted mobile selling a lot faster than we originally expected.”

Duriana has also become more involved in engaging the community. Ernst said that they are starting to organise their own events, starting this Sunday with ‘Market Day’ and ‘BBQ Party’ in Kuala Lumpur, Malaysia.

According to an official statement, the app will soon see a full redesign, which includes a cleaner layout, better browsing features and other product improvements.

At the moment, there is a combined total of 11 staff members in the Duriana team in the region. Paredes added, “It seemed almost impossible at the start, but as a team, we managed to soldier through and reach an ambitious target. Moving forward, we aim to become the number one mobile commerce platform in Southeast Asia.”

Duriana is an Alps Ventures-incubated company, with iBuy Group as a cornerstone investor since December 2013.