Oracle Corp. (ORC) reported fiscal second- quarter sales and profit that topped analysts’ estimates on growing demand for Internet-based software, which is now on track to bring in more than $1 billion in revenue this year.

Profit excluding some items was 64 cents a share on adjusted revenue of $9.11 billion, the Redwood City, California- based company said yesterday in a statement. That compares with analysts’ average projection for profit of 61 cents on sales of $9.02 billion, according to data (ORCL) compiled by Bloomberg. Adjusted revenue includes some subscription and support contracts, as well as other licensing revenue. 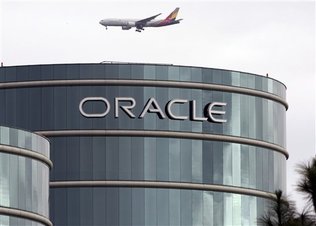 Chief Executive Officer Larry Ellison has been using acquisitions — including RightNow Technologies Inc. and Taleo Corp. this year — to add cloud computing software that customers can access online instead of storing on their own servers. That’s bolstering profit margins as Oracle fends off smaller rivals such as Salesforce.com Inc. (CRM) and Workday Inc. (WDAY), which also offer Web-based business products.

“Buyers are consolidating their purchases among fewer vendors in order to get better discounts” in tough economic times, said Yun Kim, an analyst at Janney Montgomery Scott in New York. That’s helping Oracle, SAP AG (SAP) and International Business Machines Corp. at the expense of more specialized software suppliers, according to Kim.

Sales of software that companies use to manage their operations and workforces increased more than 30 percent.

For the third quarter which ends in February, adjusted revenue will increase 1 percent to 5 percent and profit excluding certain items will be 64 cents to 68 cents a share. Analysts had projected sales to grow 4 percent to $9.46 billion and earnings of 66 cents, according to data compiled by Bloomberg.

“We are having an absolutely wonderful December so far,” even as questions remain about whether the federal government will reach a budget deal to avoid tax increases and spending cuts set to start in January, Chief Financial Officer Safra Catz said on a conference call with analysts. “Our customers have been spending money with us, even during December.”

New license and subscription sales may increase 3 percent to 13 percent in the third quarter, said Catz, to give $2.56 billion at the midpoint of the forecast range. Analysts had projected $2.54 billion, according to Jason Maynard, an analyst at Wells Fargo Securities.

Oracle’s operating margin grew to 47 percent in the second quarter from 44.6 percent a year ago — topping Kim’s 45.9 percent estimate. The company is expanding margin by focusing on more profitable systems packaged with deals with its database and applications software, Catz said in a statement.

In addition, cloud computing software is on track for $1 billion in revenue and “will become much bigger over time,” co-President Mark Hurd said in the statement.

“These are new technologies that are certainly giving chief information officers more options,” said Josh Olson, an analyst at Edward Jones & Co. in Des Peres, Missouri. “It’s a sticky franchise that will help them weather the storm from these competitors.”

In an interview on Bloomberg Television’s “Bloomberg West” yesterday, Hurd said “strong M&A” and the addition of 3,000 salespeople over the past year and a half helped lift software sales, and boosted new license sales in Europe. Oracle’s hardware business is also poised to reverse a series of sales declines, he said.

“We’re in a position where we can now grow,” he said.

New software license and subscription sales — a closely watched metric because it’s a predictor of future revenue — gained 17 percent to $2.39 billion. Analysts on average had anticipated $2.24 billion, according to Olson. Applications sales grew more than 30 percent.

Hardware revenue — servers and storage gained in the 2010 acquisition of Sun Microsystems Inc. — declined 23 percent to $734 million, while Olson said analysts were expecting $810 million. During the conference call, Ellison said the Sun deal has been “the most strategic and profitable acquisition Oracle has ever made.”

Hardware sales — which have declined in the past two years — will increase in the fiscal fourth quarter, which ends in May, Ellison said.

The Java software Oracle gained from Sun for writing business programs and linking applications to database software “is booming,” the CEO also said.

Oracle also plans to ship a new version of its database called 12c for running cloud computing applications next year.

In addition to Salesforce and Workday, Oracle is competing with SAP and Microsoft Corp. in the cloud-software market as customers replace aging software and servers with updated, Web- based products. Since the middle of the last decade, Oracle has spent more than $50 billion on more than 80 deals, fueling an expansion in sales and earnings.

Ellison has said Oracle will use cash to boost dividends (ORCL) gradually over time, rather than to make big acquisitions. The company will accelerate dividend payments for its next three quarters, making one payment on Dec. 21 and joining a list of businesses moving up payouts ahead of potential U.S. tax increases next year.

To contact the reporter on this story: Aaron Ricadela in San Francisco at [email protected]

To contact the editor responsible for this story: Tom Giles at [email protected]