NVIDIA’s CES 2013 press conference is still ongoing, but the chipmaker is already unveiling something we’ve only seen teased before: the NVIDIA Grid, a card used for cloud computing across PCs, smart TVs, and smartphones. CEO and founder Jen-Hsun Huang detailed the new card on-stage, which you can see above in a rack of 20 grid servers. Huang says the rack pushes out roughly 240 NVIDIA GPUs worth of power, or about 200 teraflops — equivalent to approximately 700 Xbox 360s. The Grid was given a tease earlier this year; the card will assist in pushing serious horsepower to the cloud, so that gaming over the air, across multiple devices becomes a less complicated reality. 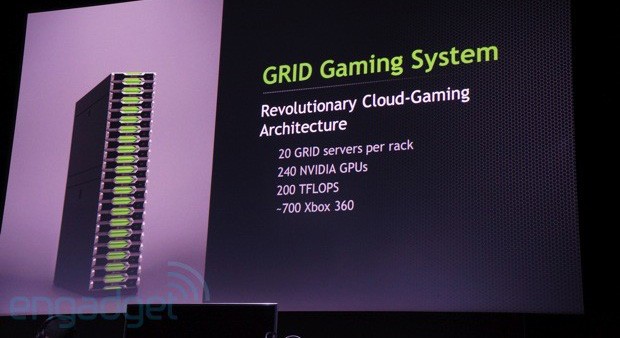 During an on-stage demonstration, NVIDIA showed Frozenbyte’s Trine running on various devices, all powered by the Grid system. Beyond just looking great, it carried over seamlessly between multiple devices. Huang also detailed NVIDIA’s first partners for Grid: Agawi, Cloudunion, Cyber Cloud, G-cluster, Playcast, and Ubitus. Apparently biggies like OnLive and Gaikai are already all set? We’ll be sure to get a closer look in the coming days as CES rages on.