The advent and rapid proliferation of cloud computing has revolutionized the way we store, process and manage data, but it comes at an environmental cost that’s not always obvious. Those petabytes of information we store on mega-servers in windowless buildings thousands of miles away are actually generating massive amounts of heat that must be dissipated efficiently by some outside means, often requiring enormous amounts of energy to prevent server failures. 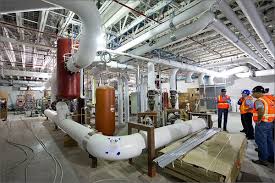 In an effort to reduce these energy costs, the U.S. Department of Energy’s National Renewable Energy Laboratory (NREL) is nearing completion of its super-efficient high-performance computing (HPC) data center. This 1 megawatt Energy Systems Integration Facility (ESIF), located in Golden, Colo., will be the first HPC data center to focus on both renewable energy research and energy efficiency technologies, NREL says.

The mechanical room under the ESIF building transfers excess server heat to keep the NREL offices and labs warm. Image by Dennis Schroeder via NREL.

The key to NREL’s approach is to remove waste heat not with chilled water and air but with lukewarm water. Because water is roughly 1,000 times more efficient as a heat exchanger than air, ESIF would not need conventional air-conditioning systems found in most data centers.

“In traditional computer systems, you have a mechanical chiller outside that delivers cold water into the data center, where air-conditioning units blow cold air under a raised floor,” explained Steve Hammond, director of NREL’s Computational Science Center, in a press release. “From a data-center perspective, that’s not very efficient; it’s like putting your beverage on your kitchen table and then going outside to turn up the air-conditioner to get your drink cold.”

In the ESIF configuration, water will enter the cooling system at an average temperature of 75 degrees F and leave at a little more than 100 degrees F. This water will then be used to generate heat for the ESIF offices and lab spaces before being chilled back down to 75 degrees F in cooling towers and recirculated through the system.

NREL estimates that it could save as much as $800,000 annually by using this cooling-tower method rather than a compressor-based cooling system, plus an additional $200,000 in avoided fuel that would otherwise be used to heat the offices. The $10 million cost of the much greener ESIF HPC is also roughly comparable to conventional data center systems of similar size, NREL says.

The ESIF HPC data center is expected to reach “petascale” capacity, or more than 1 quadrillion computations per second, by later this summer, according to NREL. If all goes well, the ESIF model could one day be applied to save energy costs at other data centers with access to a water supply.