Neutron stars in the computer cloud 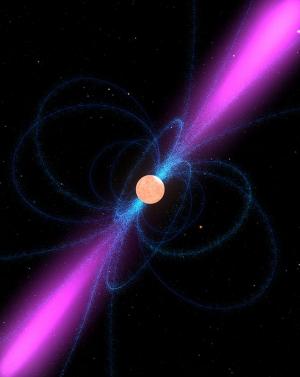 Using new search methods, the global computer network discovered 24 pulsars – extraordinary stellar remnants with extreme physical properties. These can be used as testbeds for Einstein’s general theory of relativity and could help to complete our picture of the pulsar population.

“We could only conduct our search thanks to the enormous computing power provided by the [email protected] volunteers,” says Benjamin Knispel, researcher at the Max Planck Institute for Gravitational Physics (Albert Einstein Institute/AEI) in Hannover, and lead author of the study now published in The Astrophysical Journal. “Through the participation of the public, we discovered 24 new pulsars in our Milky Way, which had previously been missed – and some of them are particularly interesting.”

Pulsars are the remnants from explosions of massive stars. They are strongly magnetized and extremely dense neutron stars. They rapidly rotate and emit a beam of radio waves along their magnetic field axis – similar to the spotlight of a lighthouse. If the radio wave beam points towards Earth, the pulsar can be observed.

Large and sensitive radio telescopes are required to discover the weak signals from new pulsars. Knispel and his colleagues analysed data from the Parkes Multi-beam Pulsar Survey, conducted from 1997 to 2001, with the 64-meter antenna of CSIRO’s Parkes radio telescope in southeast Australia. “The search for new radio pulsars is very computer intensive. To determine the a priori unknown characteristics of the pulsar, e.g., its distance or its rotation period, we have to very finely comb through wide parameter ranges,” says Knispel.

Each week, 50,000 volunteers from around the world “donate” idle compute cycles on their 200,000 home and office PCs to [email protected] Together they combine to yield a sustained computing power of around 860 teraFLOPs per second. This places [email protected] on par with the world’s fastest supercomputers. The analysis of the archival Parkes data was completed in eight months, while the same task would have taken a single CPU core more than 17,000 years.

Raw computing power was not the only important factor to discover the two dozen new pulsars. The development of new post-processing methods proved to be just as crucial. The recorded data often contain pulsar-like, man-made interference signals. The astronomers employed new methods that allowed them to discover pulsars previously masked by the presence of these interference signals.

Unusual species in the pulsar zoo

The researchers used the radio telescopes near Parkes, at the Jodrell Bank Observatory, and at Effelsberg for follow-up observations and to characterize their discoveries in more detail. “There are different kinds of pulsars, just like there are different animal species in a zoo. Some are more common than others – in some cases, only a handful of specimens are known,” explains Ralph Eatough, scientist at the Max Planck Institute for Radio Astronomy (MPIfR) in Bonn and second author of the publication.

Pulsars in binary systems are of particular interest to the astronomers. That is because these objects allow insights into their formation history and because they can be used as testbeds for Einstein’s general theory of relativity. However, discovering them is even more computationally demanding than the already challenging task of finding isolated pulsars. Tracking down their complex signals in the data increases the computing costs that far exceeds the computing capacities at the two Max Planck Institutes.

Out of the 24 pulsars discovered by [email protected], six are in binary systems orbiting the common centre of mass with their stellar partner. These systems form only under very specific astrophysical conditions, which the scientists can now reconstruct more precisely. One of the newly discovered pulsars has an unusually long orbital period of about 940 days – the fourth longest known. In the future, it could be used as a testbed for Einstein’s general theory of relativity.

From Parkes data to the Milky Way’s pulsar population

Some of the pulsars that were discovered appear to switch off their radio emission for some minutes or hours. “This phenomenon has been observed before, but it is not yet fully understood. Further investigations could help to improve our understanding of the processes in the pulsars’ strong magnetic fields, which power their radio emission,” says Eatough.

It is not only important to find these exceptional objects, but also to discover “normal” pulsars. The Parkes Multi-beam Pulsar Survey is often used as reference for numerical simulations of our Galaxy’s pulsar population. Only by finding all pulsars hidden in the data, can astronomers draw precise conclusions about the entirety of pulsars in the Milky Way.

A computing model for the future

“Our discoveries prove that distributed computing projects like [email protected] can play an important role in modern, data-based astronomy,” says Bruce Allen, director of [email protected] and director at the AEI. “We expect distributed computing to become increasingly important for astronomical data analysis in the future. [email protected] is also very well prepared for the increasing mobility of computing power,” says Allen. Recently, volunteers can not only sign up their PCs for the project, but also help to find new radio pulsars with their Android-based smartphones and tablets.

“In one of our next projects, we would like to use [email protected]’s computing power to search for pulsars in compact binary systems using ‘fresh’ data from our very sensitive radio telescope near Effelsberg,” says Michael Kramer, director at the MPIfR. Such systems enable tests of the general theory of relativity: its effects are strongest when massive bodies orbit each other at a small distance. Michael Kramer is looking forward to the search: “Who knows what surprises are waiting for us.”

This distributed volunteer computing project connects PC users from all over the world, who voluntarily donate spare computing time on their home and office computers. It has more than 340,000 participants and is one of the largest projects of this kind. Scientific supporters are the Center for Gravitation and Cosmology at the University of Wisconsin-Milwaukee and the Max Planck Institute for Gravitational Physics (Albert Einstein Institute, Hanover) with financial support from the National Science Foundation and the Max Planck Society.

Since March 2009, [email protected] has also been involved in the search for signals from radio pulsars in observational data from the Arecibo Observatory in Puerto Rico and CSIRO’s Parkes radio telescope in Australia. Since the first discovery of a radio pulsar by [email protected] in August 2010, the global computer network has discovered almost 50 new radio pulsars.

A new search for gamma-ray pulsars in data of the Fermi satellite was added in August 2011; the project is looking for, among other things, the first millisecond pulsar, visible only in the gamma-ray range.