Microsoft has teamed up with Hong Kong Broadband Network (HKBN) to bring the “cloud computing” version of its Office productivity software to millions of households across the city. The two companies yesterday jointly introduced Office 365 Home Premium software as a service, which allows consumers to subscribe for as low as HK$2 a day, less than the cost of a tram ride. 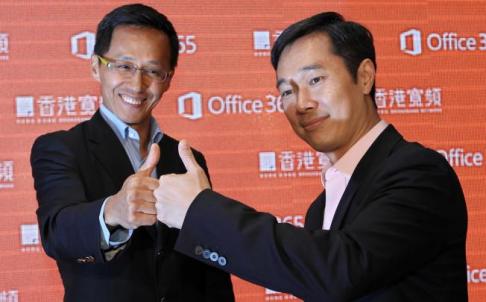 Horace Chow Chok-kee, the general manager at Microsoft Hong Kong, said the partnership with HKBN will soon be expanded to include support for small and medium-sized companies in the city.

Cloud computing enables consumers and companies to buy, lease, sell and distribute a range of software, business systems, data and other digital resources, including storage, as an on-demand service, just like buying electricity from a power grid. “Cloud” refers to the internet.

Office 365 Home Premium, which had its global launch last month, is available in 162 markets in 21 languages. It includes the latest set of Office applications: Word, Excel, PowerPoint, OneNote, Outlook, Publisher and Access.

Microsoft has more than one billion users of its traditional packaged Office software in different editions worldwide. The online subscription strategy for Office with different partners marks a big departure for Microsoft, which has relied on physical sales for decades. The move enables the company to complete directly with the internet giant Google, which has been offering its own productivity applications online for years.

HKBN’s chief executive, William Yeung Chu-kwong, said the company’s partnership with Microsoft had come at a time when it was rapidly expanding its fixed-line infrastructure to reach more customers. HKBN’s broadband service covers more than two million homes and 1,700 commercial buildings. It plans to spend HK$200 million to expand its Wi-fi network to 15,000 hot spots.

A survey by the Public Opinion Programme at the University of Hong Kong found that 96 per cent of families in Hong Kong have either broadband or Wi-fi coverage at home. Each household uses on average five internet-linked devices, such as personal computers, smartphones and media tablets.