Is the Federal Government Ready to Embrace the Cloud?

Is the federal government ready to accept the cloud as more than just a buzz word and to support the shift of IT operations to the cloud? This week, leaders on Capitol Hill and top tech firms are announcing a formal structure to support the shift of government IT operations to the cloud, launching a new congressional caucus and a private-sector advisory group to promote cloud computing throughout federal departments and agencies. 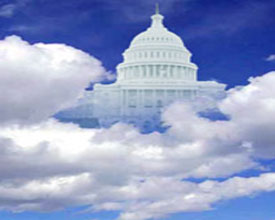 In the House, Reps. Darrell Issa (R-Calif.), the chairman of the House Oversight and Government Reform Committee, reached across the aisle to launch the Cloud Computing Caucus with Gerald Connolly (D-Va.). Issa and Connolly will serve as co-chairs of the new caucus, which aims “to try to make sure that we are injecting what might be seen as an arcane technical issue into the discussions in Congress,” Connolly said Thursday at a conference here at the Newseum focused on government cloud computing.

The conference organizer, the government IT consortium Meritalk, has joined with Microsoft, Amazon Web Services and EMC to convene an advisory group to the congressional caucus, pledging to educate lawmakers and the public about the benefits of the cloud through a series of quarterly meetings on the Hill, with the first scheduled for late February, among other outreach efforts.

“We know that this advisory group will play a very important role in keeping lawmakers informed on federal IT and cloud computing,” said Teresa Carlson, public sector vice president at Amazon Web Services. “At AWS we also are confident that cloud computing services can meet the mandates to reduce cost, drive efficiencies and increase the innovation across all the federal agencies. And this Cloud Computing Caucus Advisory Group is going to offer our lawmakers tools and resources to promote further implementation of cloud computing within the agencies.”

The advisory group, like the caucus itself, convenes in a nonpartisan spirit. Indeed, government IT reform is a rare issue that can draw support from both sides of the aisle.

Connolly, who serves as the ranking Democrat on one of the subcommittees on Issa’s panel, acknowledged that common ground between the two co-chairs of the new caucus has been in short supply.