Internap Network Services Corporation (NASDAQ: INAP), a provider of high-performance Internet infrastructure services, today released the findings of its global survey, which highlight the significant differences in public cloud infrastructure concerns between the cloud-wise, organizations that are currently using cloud services, and the cloud-wary, organizations that are not using cloud services and have no near-term plans to do so. 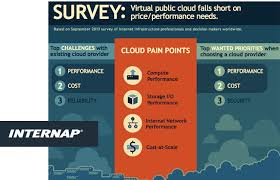 The survey also sheds light on new challenges for organizations as they operate fast, big data applications in the cloud and reveals the common misconception that virtualization is a required characteristic of public clouds.

Internap polled nearly 250 Internet infrastructure decision makers globally to gain insight into public cloud adoption, requirements and challenges. Respondents covered a range of industries, including software and Internet, hosting and IT infrastructure, media and entertainment, gaming, healthcare, education and financial services. The survey included respondents from North America, EMEA, APAC and Latin America who work for companies that range from more than $10 billion to less than $1 million in revenue.

Cloud-wise and cloud-wary organizations expressed distinct concerns with public cloud services. While the majority of cloud-wary organizations cited security concerns as the reason they are holding back from using cloud services, the cloud-wise pointed to performance and cost-at-scale as the top challenges encountered with their current public cloud service. Cloud-wise organizations ranked security challenges a distant fifth. While a portion of the cloud-wary are from security-conscious industries, such as financial services, healthcare and government, the majority may be overestimating security risks since performance and costs top the list of actual problems encountered by the cloud-wise.

A new generation of data-intensive applications that require high speed and ultra-low latency Internet infrastructure to ensure massive amounts of uninterrupted data ingestion, real-time analysis and cost efficiency at scale are surpassing the capabilities of traditional virtualized public clouds. Virtualization – along with the processing overhead of its hypervisor layer and resource constraints resulting from shared hardware – can create a significant application performance tax.

“The survey data clearly indicates that big data applications – such as those that enable personalization and targeting through customer insights, social analytics and location mapping – are pushing the performance limits of virtual public cloud environments at price-points that don’t make business sense,” said Gopala Tumuluri, vice president of hosted services at Internap. “Performance and price are primary selection criteria for organizations choosing a public cloud provider. Yet, ironically, the top challenges organizations continue to face with their existing public cloud services are performance- and price-related.”

The survey also highlights the pervasiveness of the “cloud equals virtualization” myth. Contrary to popular belief, public cloud is not synonymous with virtualization. In fact, according to the National Institute of Standards and Technology (NIST), virtualization is not a defining characteristic of public cloud. This widespread misconception presents an opportunity to expand today’s narrow definition of public cloud and build greater awareness of other forms of on-demand, elastic compute offerings, such as bare-metal cloud, that often provide superior performance and price alternatives.

Organizations with scale-out, performance-sensitive applications have been some of the first to adopt bare-metal public clouds, which combine the speed and reliability of dedicated, single-tenant servers with the agility, self-service and flexible billing of virtualized, multi-tenant public cloud offerings. Nearly two-thirds (63%) of respondents said a bare-metal cloud would appeal to them.

Internap helps people build and manage the world’s best performing IT infrastructure. Our global footprint of data centers, patented network technology and hybrid approach to hosting solutions that blends virtual and bare-metal cloud computing, managed hosting and colocation delivers a seamless end-user experience with the lowest latency every time. With a 100% uptime guarantee and award-winning customer support, Internap has been recognized by Forbes as one of America’s Most Trustworthy Companies.