Who needs a physical hard drive when you can access your computer’s contents anywhere you want, anytime you want, via Dropbox, Google GOOG -1.42%’s Drive, Apple AAPL -1.38%’s iCloud and other cloud services? That’s what an increasing number of consumers and businesses are asking themselves these days. 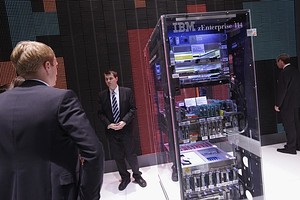 A survey released earlier this year found that 60% of American businesses are using the cloud for private data storage; in August, the Financial Times reported that 175 million people alone use Dropbox.

“Sync is the new save,” announced Drew Houston, chief executive of Dropbox, at the company’s developer conference in July. But if sync is the new save, companies who built their bread and butter on save are in trouble. Companies like IBM IBM -1.81%, whose shares were just downgraded by a Barclays BCS -2.35%analyst.

In a note released Monday morning, Barclays analyst Ben Reitzes revises IBM’s price target to $190 from $215 and downgraded the stock to “equal weight” from “overweight.” He cites concerns over the company’s cash flow, which he says could be close to $12.34 per share, or a 6% free-cash flow yield, significantly under the industry average of 10% free-cash flow yield.

What’s more, Reitzes notes that IBM’s June earnings – and the conclusion that the company “beat expectations – is actually a bit misleading, as the company incorporated tax advantages into its earnings per share estimates. “EPS would have been significantly worse if not for a $0.28 benefit from lower taxes as well as benefiting from the changes in the tax law,” he says, concluding that operating EPS has not been translating into cash flows for quite some time, and perhaps through the end of theyear. It’s this that investors should pay attention to, he says.

“It is increasingly clear to us that investors will evaluate IBM on cash flow more than earnings until revenue starts to grow meaningfully,” Reitzes writes. However, it might take some time for revenue to grow meaningfully. Reitzes’ research has found that cloud computing seems to “adversely impact all of IBM’s segments in some way,” and several surveys show that this disruption is only just beginning, with more disruption on the menu for 2014.

While Reitzes says that the principles of cloud computing are permeating all of the IT industry in some way, he believes that IBM in particular is suffering. “We believe the cloud is really driving the demise of hardware, services and software revenue throughout IT, including IBM. With each customer that deploys [cloud technology], future revenue streams from IBM become more difficult to tap,” he writes. “We believe the rise of the cloud really hurts growth in IBM’s Software division but also impacts consulting and other services revenue tied to integrating its software stack as well.”

It should be noted that IBM is not ignoring cloud computing: in July, it completed a sale of Softlayer, one of the largest providers of cloud-computing infrastructure, and just last month, the company opened an $8 million cloud-computing center in Barcelona in order to better provide cloud services to clients worldwide. Unfortunately, Reitzes believes that IBM’s adaptation of Softlayer could take some time, and that IBM needs to increase capital expenditures devoted to this area.