Last year it was revealed that 42 percent of the world’s internet users are in Asia. But is the demand for the web being met with decent internet speeds? According to a new infographic released by ASEAN DNA, Southeast Asia’s average internet speed is currently 12.4 Mbps, which is a bit behind the average global speed of 17.5 Mbps. 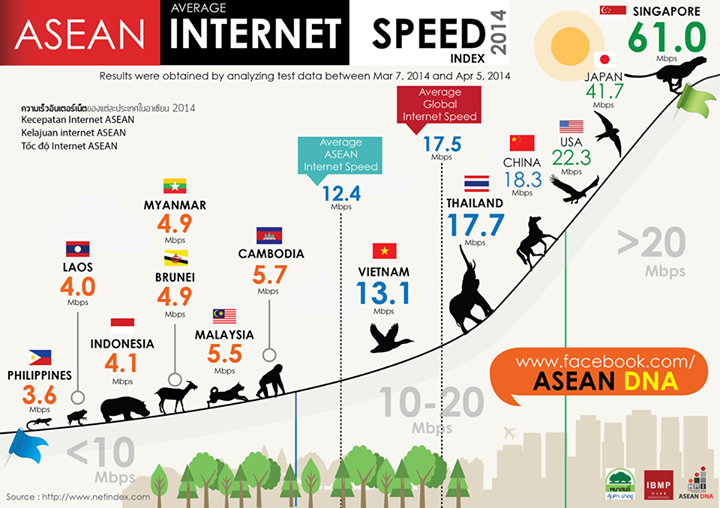 It’s worth noting that South Korea is still the world’s fastest, followed closely by Japan and Hong Kong, but those three nations are not part of Southeast Asia so they’re not in the graphic. Telcos in Singapore are already offering 1 Gbps internet speeds. Starhub started to offer this service at a mind-melting US$395.90.
But then MyRepublic started to offer the same internet speed for broadband plans at the much more reasonable price of US$39.40. The Philippines fared worst with a measured average speed of just 3.6 Mbps. But the nation’s telcos do have faster internet packages available. Philippine telco PLDT is offering three to 10 Mbps internet speeds, including its new LTE for the household option.
Rival ISP Globe provides one to 15 Mbps internet plans, also including a home LTE package. Despite the options available, issues of affordability, remoteness, and patchy speeds still blight most web users in Southeast Asia.
Share this
0 likes
Related Articles
0 Comments