How to Scale a Start-up Using Social Media

Online food ordering service Eat24 gets about a million visits a month and will reach $150 million in sales this year. Here’s how it happened. 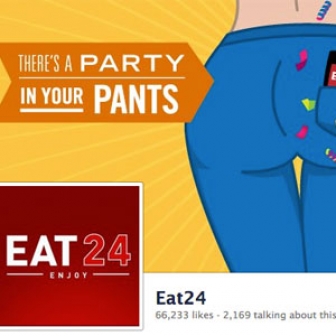 Eat24 is a Web and mobile food ordering service that’s grown like crazy in the last few years. What started as two guys in a San Francisco apartment in 2008 has grown to 150 employees, 20,000 restaurants available in 850 cities, more than 1 million visits to its website a month, and a projected $150 million in sales this year.

A good part of Eat24’s success stems from the way the bootstrapped company uses social media. Here’s their recipe for success.

Admittedly, this strategy isn’t going to work for every start-up. Eat24 is never closed, so there’s always someone who has a window into what’s going on online. “We have 24-hour customer service, so say a tweet comes in at four o’clock in the morning and it’s something above the level of customer service. They will call and wake up someone on the marketing team who help on the response,” says Eat24 co-founder and CEO Nadav Sharon.

So whether it’s interacting with customers on Facebook, Twitter, Yelp, YouTube, Pinterest, Tumblr, LinkedIn, Google+, or its own blog, across all these touch points the company says it tries to answer every comment posted by customers and fans–whether it’s retweeting customer tweets, replying to mentions, or following people. It’s no small feat–in a given weekend Eat24 could get hundreds of mentions on Twitter alone.