How the Xbox One draws more processing power from cloud computing

The original version of this story misstated the 300,000-server capacity for Xbox One’s cloud computing architecture as 30,000 servers. Ars regrets the error. While Tuesday’s Xbox One presentation answered some questions about Microsoft’s upcoming system, it left just as many or more unsettled. 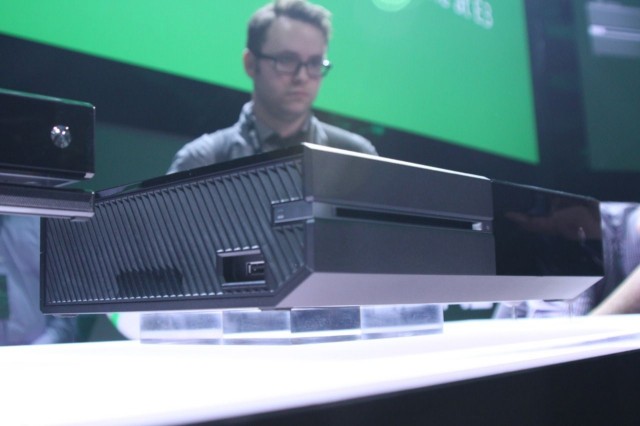 Luckily, Ars got a chance to sit down with General Manager of Redmond Game Studios and Platforms Matt Booty to try to get more answers. While he wasn’t able to answer some of the most pressing questions about the system, he was able to dive deep into some of the technical details.

Our first question had to do with the 300,000-server cloud architecture that Microsoft says the Xbox One will use to help support “latency-insensitive computation” in its games. What does that mean exactly, and can laggy cloud data really help in a video game where most things have to be able to respond locally and immediately?

“Things that I would call latency-sensitive would be reactions to animations in a shooter, reactions to hits and shots in a racing game, reactions to collisions,” Booty told Ars. “Those things you need to have happen immediately and on frame and in sync with your controller. There are some things in a video game world, though, that don’t necessarily need to be updated every frame or don’t change that much in reaction to what’s going on.”

“One example of that might be lighting,” he continued. “Let’s say you’re looking at a forest scene and you need to calculate the light coming through the trees, or you’re going through a battlefield and have very dense volumetric fog that’s hugging the terrain. Those things often involve some complicated up-front calculations when you enter that world, but they don’t necessarily have to be updated every frame. Those are perfect candidates for the console to offload that to the cloud—the cloud can do the heavy lifting, because you’ve got the ability to throw multiple devices at the problem in the cloud.”

Booty added that things like physics modeling, fluid dynamics, and cloth motion were all prime examples of effects that require a lot of up-front computation that could be handled in the cloud without adding any lag to the actual gameplay. And the server resources Microsoft is putting toward these calculations will be much greater than a local Xbox One could handle on its own. “A rule of thumb we like to use is that [for] every Xbox One available in your living room we’ll have three of those devices in the cloud available,” he said.

While cloud computation data doesn’t have to be updated and synced with every frame of game data, developers are still going to have to manage the timing and flow of this cloud computing to avoid noticeable changes in graphic quality, Booty said. “Without getting too into the weeds, think about a lighting technique like ambient occlusion that gives you all the cracks and crevices and shadows that happen not just from direct light. There are a number of calculations that have to be done up front, and as the camera moves the effect will change. So when you walk into a room, it might be that for the first second or two the fidelity of the lighting is done by the console, but then, as the cloud catches up with that, the data comes back down to the console and you have incredibly realistic lighting.”

Does that mean that Xbox One games will feature graphics that suddenly get much more realistic as complex data finally finishes downloading from the cloud? “Game developers have always had to wrestle with levels of detail… managing where and when you show details is part of the art of games,” Booty said. “One of the exciting challenges going forward is a whole new set of techniques to manage what is going to be offloaded to the cloud and what’s going to come back.”

And what about those times when a gamer doesn’t have an active Internet connection to make use of the cloud’s computational power? Microsoft has confirmed that single-player games don’t have to be online to work, but all this talk of cloud computing seems to suggest that these games might not look or perform as well if they don’t have access to a high-speed connection.

“If there’s a fast connection and if the cloud is available and if the scene allows it, you’re obviously going to capitalize on that,” Booty told Ars. “In the event of a drop out—and we all know that Internet can occasionally drop out, and I do say occasionally because these days it seems we depend on Internet as much as we depend on electricity—the game is going to have to intelligently handle that.” Booty urged us to “stay tuned” for more on precisely how that intelligent handling would work, stressing that “it’s new technology and a new frontier for game design, and we’re going to see that evolve the way we’ve seen other technology evolve.”

On Tuesday, Microsoft announced that a new Kinect sensor would be included in the box with every Xbox One and subsequently said that the device has to be plugged in for the system to function. My first reaction to this news was that it seemed like an unnecessary cost being forced on gamers who might not want to invest in motion controls or voice commands in order to play standard games on the Xbox One.

Booty had a different perspective on the Kinect requirement, though. “From a design point of view, we don’t see [the Kinect] as something that would be separate from Xbox One itself.” Booty implied that the Kinect could have even been built into the Xbox One casing, if not for concerns about players wanting the Kinect and the Xbox One in slightly different places in their living rooms. “It just happens to be in a different plastic housing, and I think that’s just because of location.”

To Microsoft, the Kinect is just as crucial to the Xbox One experience as some truly basic input options are to the modern PC experience. “It’s kind of like going back to the days before PCs had mice, and games would have to say ‘this game supports a mouse.’ You would never think that any computer these days would not have a mouse or some sort of touchpad. I think that’s the way we want to think about Kinect going forward. … A laptop would be cheaper without a keyboard, but you wouldn’t think of doing it without it, right?”

Those who have moved on to smartphones and tablet computing might quibble with Booty’s analogy there. But Booty also stressed that integrating the Kinect with the Xbox One is about more than just skeletal tracking and motion-based gaming. “It is about personalization, it is about recognizing your voice and recognizing you, it is about being able to empower and enable communications through things like Skype. We really see it as a multi-purpose sensor in the living room that’s perfectly suited to an all-in-one entertainment box.”

On the gaming side, Booty argued that packing a depth-sensing camera in with the system could help get controller-free, full-motion gaming out of the small niche it currently occupies. “Because it is known to always be there, because it is a fixed performance spec, because it is something you can depend on, I think developers are going to find all kinds of new things to do with it because they don’t have to worry about it being a unique accessory or something that only a small portion of the user base has,” he said.