If you have been following news in the tech industry at all lately, then you should probably be aware that Microsoft just released the latest version of Windows on October 18th, and may well already have a copy of it up and running on your machine. 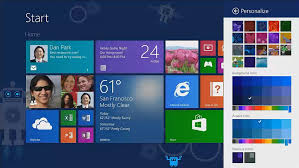 While some early adopters already had the buggy ‘preview’ version of 8.1 running on their machines, only now is the new operating system officially available in its finalized form, and so far the reviews have been positive.

One of the things that reviewers are praising about the new system is the heavy integration of the cloud into the very workings of this new Windows. As a feature, it’s incredibly useful for everyone from casual users to big businesses, and as an indication of the direction that things are heading it’s very telling and very interesting.

The Cloud and Windows 8.1

So how is Microsoft pushing the cloud in Windows 8.1?

Well specifically it’s through the use of their already popular and established ‘SkyDrive’ service. Essentially this is a cloud storage service much like iCloud or DropBox, except that it is now much more integrated into the Windows experience.

For instance, when you open an explorer window, you will be greeted with the usual quick links down the left including ‘This PC’ (My Computer) and the usual ‘favorites’. Now though you will also have the additional ‘SkyDrive’ tab right on the left allowing you to treat it just as any other folder. And when you save a file in the new Microsoft Office you will be encouraged to do so using ‘Documents’ on the SkyDrive rather than ‘Documents’ on your C drive. Essentially this will make it much quicker and easier to access those files than ever before – allowing you to treat them as though they were in any other folder on your computer meaning that in theory, you should never forget to back anything up.

Other Windows ‘apps’ make further use of this extra storage too, often opting to save onto SkyDrive to ensure that you never lose your files. Take a photo with the camera app for instance and that picture will be dutifully saved to the cloud for you to access later.

The Cloud is the Way Forward

When Microsoft started selling its Surface Pro line of devices, they made the choice to offer 7GB worth of free storage to anyone who bought one. As the built-in storage on those devices was relatively paltry, this helped to make the deal a little sweeter and ensured that users would have somewhere to store their larger files.

But now the Surface 2 is out, and this time Microsoft are offering a whopping 200GB of free storage to anyone who buys one. This is the most free storage that has ever been given away in a comparable deal and maybe a real sign of things to come.

Clearly Microsoft understands the power and the importance of the cloud in modern computing. It will be interesting to see how companies like Apple and Google respond, and what the next evolution in cloud storage will be.