The decision over whether to move your organization’s IT to the cloud can be a daunting one. After all, it means a wholesale change in the sourcing and delivery of IT products and services. However, many companies are making the leap, at least for select capabilities—a recent by CDW of 1,242 IT professionals found that more than half of organizations are moving a variety of capabilities to the cloud. And a majority of them are recognizing cost savings and increased profits, according to another study by Rackspace Hosting. 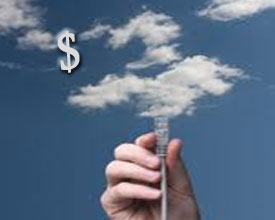 “The findings were pretty telling in terms of the adoption of cloud computing and the benefits of cloud computing,” says John Engates, CTO of Rackspace Hosting. “The bottom line is cloud saves companies money and increases their profits.”

“The study shows just what an important impact cloud computing is having on U.K. and U.S. businesses,” Engates says. “It’s particularly interesting that, despite the ongoing economic backdrop, half of businesses on both sides of “the pond” are actually increasing profits and growing their business through the use of the cloud. This includes investing in headcount and wages as well as driving further innovation.”

Turning to Cloud for Storage and Collaboration Apps

The services or applications organizations are moving to the cloud are largely dependent on company size and industry, according to CDW. For instance, storage is the primary service for 40 percent of small businesses and 35 percent of mid-sized businesses, whereas large businesses and the federal government are first and foremost going to the cloud for conferencing and collaboration applications (40 percent and 39 percent, respectively). Organizations are also turning to the cloud for messaging, office and productivity suites, business process apps and compute power.