Here's What Facebook's New 'Want' Button Will Look Like

People are going crazy over the announcement that Facebook, in a continued effort to woo advertisers since the IPO, announced that it’s testing a “Want” button.

Although someone at Facebook was itching to clarify to us that it’s not really a “want button” but rather an action on the Facebook platform — since “the feature does not extend off Facebook.com through the web the way social plugins (the Like button) do.” 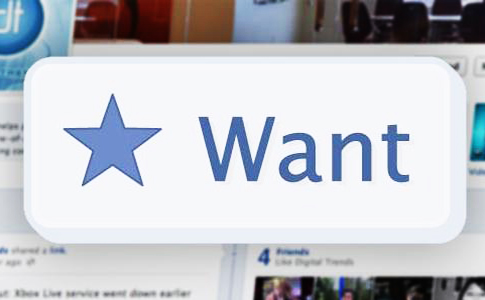 When blogger Tom Waddington found code for the “Want” button-like device (or whatever Facebook wants to call it) in OpenGraph, he showed us what the prototype would look like:

The shopping bag was very subtle.

But we now know what the real thing will look like, and it’s a little different. Here’s a sample of how testing partner Pottery Barn is using the feature:

The bag is gone, the star remains.

You can also explain why you want said object, in this case, a wreath:

The current test also allows users to “Collect” or “Like” a product. The “Like” still has a thumbs up, and the “Collect” also adopts the star.

Dare we say, though, that it reminds us a little of this:

Granted, as Mashable pointed out, Facebook has one step up on Pinterest. The wantable products will be attached to a buy link. Pinterest doesn’t have that yet.

What do you think?