Most of the time, Salesforce.com’s Marc Benioff is credited with inventing the new cloud model for delivering software via the Web.

But Larry Ellison, who once famously denounced the term “cloud computing,” is now standing up to take credit for the concept, if not the currently fashionable term. 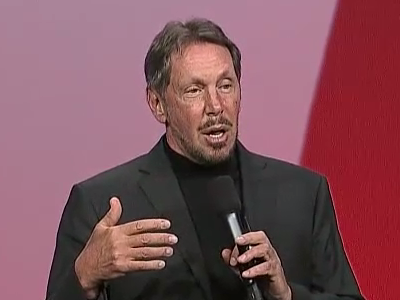 NetSuite CEO Zach Nelson told Business Insider that he can vouch for Ellison. Nelson worked with Ellison, Benioff, and another key player, Evan Goldberg, at Oracle back in the 1990s.

Goldberg really thought up the idea of software as a service, says Nelson. Goldberg was “an incredible developer” and Ellison wanted to invest in him, according to Nelson.

In a meeting, Goldberg described his idea to Ellison of building “a version of Siebel but on the Internet,” Nelson says. (Siebel was the biggest customer-relationship management software maker of the day.)

Ellison said the idea was interesting but “no one runs their business on Siebel. You have to build the back office first, the accounting system and the ERP system, and then you build the other systems around it,” Nelson recounted.

So Goldberg agreed to do that and Ellison funded it. The company was born as NetLedger. It would later change its name to NetSuite. “There was one other guy in that conversation and that guy was Marc Benioff. Benioff called back two weeks later and said ‘I’m going to do that Siebel online thing,’ and that became Salesforce.com. Larry funded both of those companies,” says Nelson.

And until last year, Ellison held a soft spot in his heart for Benioff, giving him a keynote at Oracle’s annual conference OpenWorld.

That relationship fell apart in 2011. In 2005, Oracle bought Siebel, Benioff’s biggest competition, and a quiet feud began to simmer.  In 2011, Benioff got yanked from the speakers’ list at OpenWorld. So he invited everyone to come hear him talk at a hotel across the street.

This year, Benioff wasn’t invited to speak at OpenWorld at all.

Taking his place today at OracleWorld, in a prime keynote spot, was Nelson, who joined Goldberg’s company in 2002. He talked about a cozy new partnership with Oracle where NetSuite’s cloud software can work with Oracle’s E-Business Suite. The idea is to divide the market so that Oracle gets the big enterprise deals, and NetSuite gets the midsized deals and can even snag some business alongside Oracle.